10 Things to Look for When Buying a Laptop

by Wesley Fenlon
Prev NEXT
5 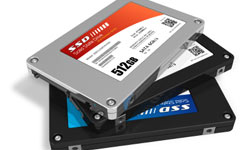 Solid state drives are reliable and rugged, but they can be costly, and they can't store the same amounts of data as traditional hard drives.
©iStockphoto.com/Oleksiy Mark

For years, all laptops stored data on spinning physical discs called hard drives. Most of them still do, but faster solid state drives that use silicon-based memory are becoming more affordable and more prevalent in mobile computers. Because solid state drives don't rely on moving parts, they're more reliable in computers that tend to get bumped and jostled around. The downside: They're expensive and don't offer nearly as much data storage.

Storage space may not be a big concern for you -- if you store most of your data in the cloud and don't plan to load a computer up with gigabytes of music and video, a SSD or small HDD will suit you just fine. Random access memory (RAM) is a different story. Every piece of software running on a computer and the operating system itself (usually meaning Windows) stores data in RAM to function. The more RAM you have, the better -- it's smart to upgrade this component when possible. To run Windows 7, 4 gigabytes is a comfortable minimum.

Apple's MacBook Air and similar computers in the Ultrabook category of PCs are beginning to offer SSDs at reasonable prices. If you need more than 128GB of storage, best stick to a traditional hard drive, or be prepared to pay a pretty penny for an upgrade. Speedy SSD storage is fantastic, but in many cases going with a thin-and-light computer means giving up a disc drive and embracing the Internet cloud.