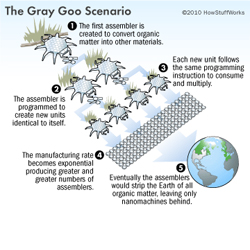 One potential downside to replicator technology is the gray goo scenario, where the replicator uses all available organic matter as raw construction material.
2010 HowStuffWorks

Could we ever build an actual working replicator? Scholars like K. Eric Drexler think it might be a possibility with nanotechnology. We may one day be able to construct machines that measure only a few billionths of a meter across -- so small you can't even see them with a light microscope. These molecular machines could, in theory, assemble material one molecule at a time. With billions of these assemblers, you could create practically anything as long as you had the raw materials at hand. But before you throw away your microwave and toss out your oven, you should know that there are other scientists like Richard E. Smalley who think that there are fundamental barriers that make devices like molecular assemblers a virtual impossibility.

For the time being, we here at HowStuffWorks.com have to make our hot Earl Grey tea the old-fashioned way. But we're still hoping nanotechnology brings the replicator to reality!