by Jonathan Strickland
Prev NEXT
6 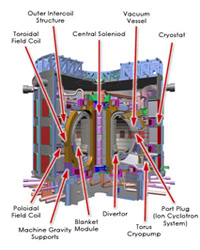 Fusion takes a lot of energy -- a real reactor would be enormous compared to Mr. Fusion.
Courtesy ITER

We're going back to "Back to the Future" for this one. The trilogy introduced lots of cool gadgets: time machines, flying skateboards and self-tying shoes are just a few examples. But Mr. Fusion could revolutionize everything.

It's a throwaway visual gag at the end of the first Back to the Future film -- Doc hurriedly sorts through Marty's garbage can, pulling out banana peels and beer. He feeds it into the Mr. Fusion port on the back of the time machine. The big joke is that this relatively tiny device can generate the awesome power -- 1.21 gigawatts' worth -- that the flux capacitor needs in order to make time travel possible. Throughout the entire film we've watched Marty and Doc try to harness lightning to get Marty back to 1985 and by 2015 the same power can be generated by an off-the-shelf appliance.

But imagine how different our world would be if Mr. Fusion were real. We could generate all our power needs just by feeding in some garbage. A couple of nuclear reactions later and we'd have plenty of juice to run our homes and vehicles. It solves recycling problems and energy conservation all in one fell swoop! Sure, there are lingering concerns about using a nuclear reactor in such a casual way, but without risk there's no reward, right?