by Jonathan Strickland
Prev NEXT
10 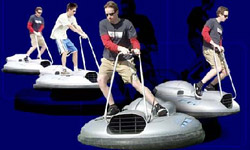 The Airboard is a far cry from the toy we saw in "Back to the Future 2" but at least it's moving in the right direction.
Photo courtesy Arbortech Industries

"Back to the Future 2" had a lot to live up to. The first film was a runaway success. It introduced the flux capacitor -- a component we'll visit a little bit later. It also created a market for DeLorean cars, a vehicle that by 1985 was on the road to oblivion. And while you might argue the second film lacks the charm and pacing that was present in the original movie, it did capture our imaginations with the hoverboard.

Simply put, a hoverboard is a skateboard without the wheels. It defies gravity, allowing the rider to zoom above the ground. To turn on a hoverboard, you simply lean as if you were on a normal skateboard. And as we learn in the film, hoverboards don't work on water unless you've got power.

How do they work? It beats us! The film never really attempts to explain what makes hoverboards tick. We know we'd love to own one and swoop around the office. Shortly after the film hit theaters, a myth circulated that the hoverboards in the film were real products -- they even had the Mattel logo on them. But the myth said that consumer groups and concerned parents pressured Mattel to pull hoverboards from production out of fear that the boards would cause countless injuries. In truth, there never were any working hoverboards -- all those effects came from movie magic. But we're still holding out hope that one day we'll get to glide along with Huey Lewis music blasting in the background.