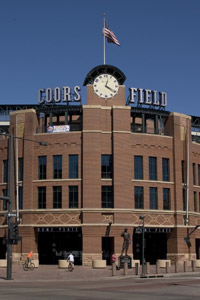 The clock atop Denver's Coors Field is a Bulova timepiece.
George Rose/Getty Images

As of Spring 2012, Bulova offered the Precisionist movement in six style collections ranging from sporty to dressy with prices ranging from about $300 to $900. For the most part, the collections target fashion-conscious consumers, with the major difference among the styles involving face shapes, engravings, colors and material selections. These range from slim stainless steel cases with leather straps, mother-of-pearl inlays and diamond accents to chunky titanium cases with ballistic fabric straps and carbon fiber inlays.

Most of the watches are water resistant to about 100 feet (30 meters) -- although one might find it hard to imagine taking the diamond-studded designs anywhere near a pool, let alone an ocean. The Champlain collection incorporates screw-back cases and extra gaskets to push the water resistance to about 900 feet (300 meters), making them suitable for use by divers [source: Bulova].

The Bulova Watch Company is employing new-to-the-market ideas in the Precisionist mechanism, but the company itself is no spring chicken. It has been in existence since 1875, and launched its first line of wristwatches in 1919 to respond to the demand of soldiers in World War I, who needed easier access to an accurate timepiece than could be had from a pocket watch. Bulova's wrist-mounted option caught on, and veterans brought the idea home from the battlefield.

Over the years, Bulova has had other firsts that go beyond watch making. In 1941, the company made advertising history when a commercial for its wares aired during a baseball game. Legend has it the company paid a whopping $9 for the commercial (for more on Bulova's commercial first, see our article 10 TV Moments that Changed the World). And the company's Accutron quartz-tuning-fork–regulated technology, which has been used everywhere from NASA satellites to the first moon walk to Air Force One, remains a solid contender in the watch market today.

This one's gonna cost me.

As I spent my research time studying the inner workings of various high-end watches, I realized how much work goes into making an accurate timepiece. Think about it: When the various parts in a watch are measured in microns, something as small as a misplaced drop of lubricant or a stray eyelash can be the difference between a useful piece of jewelry and a dud just waiting to be returned to the manufacturer. Even microscopic bits of dust can do a number on a watch's precision. And then there's temperature, magnetic fields, imbalances not aligned with the expected gravitational pull ... but I digress.

My paranoia came from studying my own watch, a well-loved, off-brand automatic I got a few years ago as a gift. I still get a kick out of its skeletonized mechanism that lets me watch the balance wheel flicker back and forth as the second hand ticks around at 4 beats per second.

But it's drifting, or at least that's the way it seems. Maybe it's simply in need of lubrication and a little cleaning. Or perhaps it's bounced off the floor one time too many in my early-morning fumbling to get dressed for work. Either way, all it took was this article to get me paying attention to the watch's accuracy.

It's true that automatics are less precise than quartz watches. And I have to admit that some of the Precisionist models are quite attractive. My brain's now working, and I can see it: a well-earned paycheck from writing about watches will arrive just in time ... to plunk down for a nice new watch.

Funny how those things go, isn't it?