Some Background on Time and Timepieces 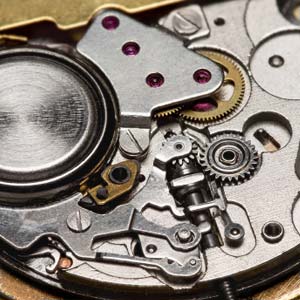 This isn't a Precisionist, but here you can see the inner workings of a quartz watch. The purplish bits are artificial ruby bearings, which create less friction and are longer lasting than metal bearings.
©iStockphoto.com/chasmer

Before we dive into the question of accuracy, let's take a second to get philosophical. Time measurement, after all, is something of an arbitrary construct. The seconds, minutes and hours we use to track duration are basically agreed-upon standards that humankind has employed to represent our march from the past into the future. Existence would not stop if we chose to stop tracking time in such a precise matter -- we could function just fine if our main time measurement consisted of sunrise, sunset and the position of the sun in between. A deep dive into the nature of time digs into such sticky wickets as multidimensionality, time travel and the nature of the universe. But for those of us inclined toward more concrete discussions, timepieces offer a more manageable topic [source: Biba].

Somewhere along the line, our ancestors decided that it was useful to track measured units of time. It may have been a pre-Egyptian noble or scholar who first noticed the steady march of shadows on a sunny day, but sundials -- the earliest timepieces -- have been recovered from archeological sites dating back to 800 B.C. [source: Gascoigne].

Modern watches and clocks work using principles that first came into widespread use in the middle of the 17th century: A resonator, which is a device such as a pendulum, spring-driven flywheel or electrified quartz crystal, oscillates, which means it vibrates or swings back and forth at a consistent, measurable rate. A timepiece will use gears, cams, electric circuits or a combination thereof to translate that oscillation into the measured movement of the clock's hands or a digital readout of the time [sources: Gascoigne, DiFranco].

For example, a grandfather clock may have a pendulum designed to swing from one side to the other every second. That motion momentarily releases a spring in the clock's mechanism, allowing the second, minute and hour hands to progress by their respective distances around the clock face. Suppose, now, that your clock has a pendulum that swings every half-second, doubling its oscillation. Your clock can now track half-seconds, giving the hands a smoother motion and allowing you to adjust it with a finer degree of precision. Take this concept, replace the pendulum with an object that oscillates at an extremely high frequency -- multiple times per second -- and you have the makings of a modern timepiece.