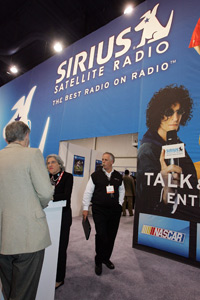 Despite the severity of the current economic downturn, analysts predict the mobile communications industry to continue its exponential growth.
Ethan Miller/Getty Images News

One thought might occur to an adult considering this product: Does it make sense to spend so much money to avoid speaking to the kids on road trips? Will anyone buy this?

Keep in mind that this product currently costs at least three hundred bucks up front, plus $20 a month for the subscription. It's not exactly cheap, especially when you consider that conversation is free. On the other hand, part of that subscription price includes access to Sirius audio channels.

Mobile reception systems for satellite television provider DirecTV have been available for years, but their bulk (appropriate only for SUVs, RVs or vans and not passenger cars) and expense ($1,500 or more) have sharply limited their appeal.

From a business perspective, Sirius is doing what any forward-thinking subscription media service should do. They're using technology to search for ways to reach new customers and expand revenue. Cable TV companies, phone companies and satellite programming providers all aim to increase what they call average revenue per unit (ARPU). ARPU is a measurement -- specifically, total product revenue divided by the total number of product subscribers -- used by communications companies to track a product's popularity and growth. They can increase ARPU by raising rates and aggravating customers, or they can do it by adding services and charging a bit more for them.

What's unknown at this point is how consumers will respond, given the rapid changes occurring in the marketplace. Streaming video to cell phones has gained more visibility in the United States with services such as Verizon's V-Cast and Sprint's Sprint TV. At the same time, the financial crisis that boiled over in 2008 threatens to dull consumer appetites for non-essential expenses for some time.

There hasn't been an immediate rush by U.S. consumers to embrace mobile live television offerings like Backseat TV, but analysts expect that to change. The United States has typically lagged behind places like Japan and Europe when it comes to mobile communications -- more evolved cell phone networks in these regions have permitted quality streaming video since the early 2000s. "It's just a matter of time" before the mobile video lifestyle becomes popular, telecom analyst Jeff Kagan told U.S. News & World Report [source: LaGesse].

­For now at least, Sirius considers Backseat TV an ancillary service, or something that's not a primary contributor to its bottom line. However, as mobile video gains wider consumer acceptance in the United States, it would be short-sighted to predict the "small screen" sector will remain small.

To find out more about Sirius Backseat TV, head over to the next page.