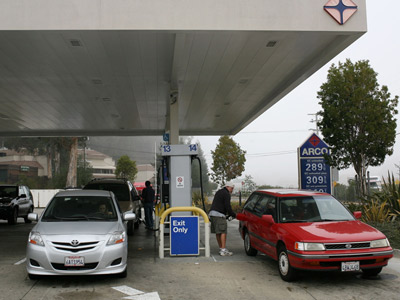 After driving with a mileage monitor, you may notice that you fill up the tank a little less often.
Justin Sullivan/Getty Images

The accuracy of car energy monitors is difficult to pin down. You'll find some sources that say yes, they return accurate figures; others say they see some real discrepancies. For the purposes of calculating MPG, this is an issue. But for the purposes of calculating a change in MPG, it doesn't really matter that much. If your gauge says 25 miles per gallon one minute and 27 the next, you can be confident your mileage increased, even if the numbers aren't spot on.

­The amazing thing about these real-time monitors is that they do tend to increase gas mileage. They don't change anything in the engine or the gasoline. What they change is the mind-set of the driver. It's a matter of cause and effect: When you floor it after a stop sign and you see a number on a screen drop from 27 miles per gallon to 20, it's hard to ignore it. Real-time energy monitors show exactly how much gas you're wasting (and how much money you're throwing away) each time you slam on the brakes or cruise along at 85 mph instead of 65 mph. With that level of awareness, behavior changes. It changes so much it can even turn into a game to keep breaking your own mileage record. Prius owners have been known to get into heated competitions to get the most miles per gallon (sometimes called hypermiling), which occasionally results in mileage that far exceeds the Environmental Protection Agency-mileage rating for the car.

The energy monitors that come in the Prius, the Nissan Altima Hybrid and the Lexus RX Hybrid, among others, are only one way to get real-time feedback. You don't have to go out and buy a new car. If your car is gas-powered (as opposed to diesel) and was made after 1996, it has a port you can use to hook up an aftermarket monitor like the ScanGauge or the Kiwi. Both cost a couple hundred bucks and do pretty much the same thing in terms of energy feedback.

For more information on energy monitors, gas efficiency and related topics, look over the links below.