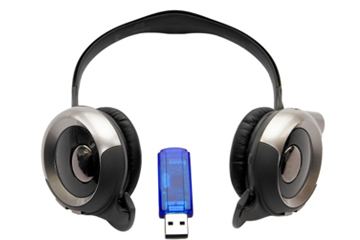 Radio waves represent part of the electromagnetic spectrum. Light is also part of this spectrum. The visible spectrum of light has a wavelength range of 390 to 750 nanometers (a nanometer is one-billionth of a meter). Infrared (IR) light has a longer wavelength range of around 0.74 micrometers up to 300 micrometers (a micrometer is one-millionth of a meter). Radio waves are the big kid on the block -- the wavelengths range from 1 millimeter to 100 kilometers.

Radio waves have a few advantages over other types of electromagnetic radiation. But to get radio waves from a stereo system to a speaker you'll need a few components. A transmitter connected to the stereo system converts electrical signals to radio waves by sending alternating current through an antenna. The radio waves broadcast out from the antenna.

Radio waves broadcast in different frequencies. A frequency is the rate at which a radio wave oscillates -- how long it takes for a radio wave to go from peak to trough to peak again. It takes more time for a longer radio wave to oscillate than a shorter one. Radio frequencies are important because radio transmissions using similar frequencies can interfere with one another.

That interference can be a major problem -- many of the communications systems we rely upon today rely upon radio transmissions. For this reason, many countries have established rules that limit the types of radio frequencies various devices are allowed to generate. This limits the potential for signal interference.

In the United States, the bands of frequencies allotted to devices like wireless speakers include 902 to 908 megahertz, 2.4 to 2.483 gigahertz and 5.725 to 5.875 gigahertz [source: Schotz et al.]. Within these ranges, wireless transmissions shouldn't interfere with radio, television or communication signals.

Within these ranges are different protocols, such as Bluetooth. The Bluetooth protocol allows devices to connect together. Bluetooth can also allow a manufacturer to include controls on a speaker that go beyond volume and power. Because the Bluetooth protocol allows two-way communication, you could have a wireless speaker that lets you control what track is playing or what radio station your system is tuned into without making you get up to change it on the main system.