Browse the article How the reactable Works 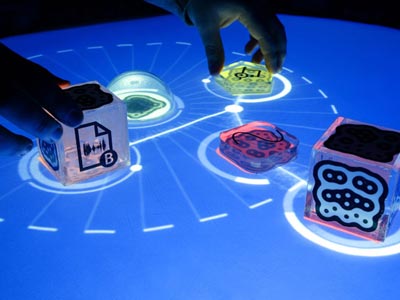 Simple blocks are a common symbol of childhood creativity, curiosity and intelligence. Placing building blocks next to or on top of each other allows children to let their imagination run wild and create any number of structures on a playroom floor. If letters, pictures or colors are added to the blocks, children can add words, patterns and other arrangements into their designs.

If we add a table under those blocks, the building process all of a sudden becomes much more collaborative. Although we typically think of a table as a simple object -- one that's useful, but maybe a little static -- it's actually yet another important symbol. Tables can be a fun space, a place where people gather to exchange conversation, ideas and work. Many elementary schools choose to sit classmates around larger, round tables instead of individual tables to encourage cooperation and group work. Tables aren't just for child's play, of course: Experienced architects draw out plans for major construction projects on top of tables, and artists might use tables to construct larger pieces of art.

­Taking the two basic concepts of blocks and tables, four graduate students from the Univesitat Pompeu Fabra in Barcelona, Spain, added music to the mix and designed something called the reactable. The reactable is essentially a music synthesizer, and if you hear it played, it sounds similar to a lot of modern electronic dance music. The difference between the reactable and a typical synthesizer, however, is that participants manipulate sound with blocks on a round table. By rotating or moving the blocks on the table, a person (or several people) can tweak a variety of sounds, beats and notes, creating an electronic soundscape.

In addition to the ease with which you can maniupulate sound, there's also a visual element: The table has a translucent blue surface that lights up with dynamic animations that highlight the musical changes. For musicians and spectators alike, the reactable is a musical instrument that's not only fun to listen to, but fun to watch as well. 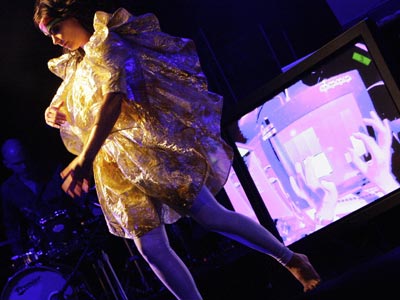 Icelandic singer Björk performs at the Sydney Opera House in Sydney, Australia, during her world tour in support of her album "Volta." If you look closely at the video screen in the photo, the image is of a DJ tweaking blocks on the reactable.
Anoek de Groot/AFP/Getty Images

Although it's bright and flashy on the outside, the reactable is, at its most basic, a music synthesizer, a musical instrument that electronically manipulates notes and tempos, bending and shaping the properties of sound waves. These manipulations create interesting noises and variations on musical notes that musicians can't easily make with regular acoustic instruments like pianos or guitars. By turning a knob on a keyboard synthesizer while holding down a note, for instance, the user can make the pitch of a note bend and waver, making eerie electronic sounds that swell up and down.

­When four students from the Univesitat Pompeu Fabra -- Sergi Jordà, Martin Kaltenbrunner, Günter Geiger and Marcos Alonso -- set out to design the reactable, they did so while keeping a few basic principles in mind. They wanted the instrument to be collaborative: Even though it's possible for one person to play alone, the table is round and allows many people to gather around and interact with the instrument's several blocks. The reactable should also be intuitive and easy to learn, yet challenging to listen to and play. If someone were to walk up to the table without a set of instructions or any guidance, that person should be able to pick up the basics fairly quickly. In other words, anyone, from inexperienced or novice players to seasoned DJs, has the ability to make the reactable sound and look cool, according to its makers.

In the team's words, the reactable is a "novel multi-user electro-acoustic musical instrument with a tabletop tangible user interface" [source: Universitat Pompeu Fabra]. While it's a bit of a mouthful, the phrase explains the instrument nicely. The reactable is, of course, a multi-user instrument -- a certain number of people stand around the object and, using their hands, create sound by manipulating the blocks. It takes a certain amount of skill to learn, but with enough practice, it's possible to play with ease. Although it's somewhat of an umbrella term, any music that is "electro-acoustic" refers to music that's been produced with the use of electricity. In the case of the reactable, all sound coming from the synthesizer is electronic, and therefore electro-acoustic. The tabletop refers, of course, to the device's surface, and the fact that it's a "tangible user interface" simply means players can manipulate objects by using their hands, twisting and moving the blocks like knobs on a traditional synthesizer.

Once those blocks are placed on the table's surface, what do they do? And how do you know which block is which?

Björk and the reactable on Tour

The reactable has gained popularity over the years through demonstrations at festivals and museums, and it's won several awards, including an Ars Electronica Golden Nica and the Premi de la Cuitat de Barcelona (Barcelona City Award) in 2007. But the technology received its biggest boost when Icelandic musician Björk saw a video demonstration on YouTube. She decided to take the synthesizer and a DJ who could play one on her tour promoting her 2007 album, "Volta," and the reactable became an important visual element to her shows 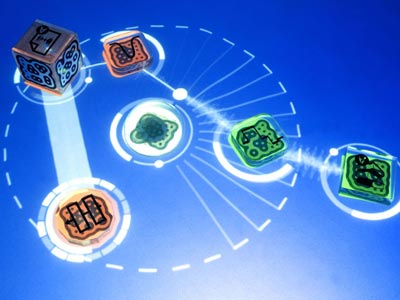 The position of each object on the reactable's tabletop surface affects the outcome of the music, giving players a seemingly endless amount of choices.
Music Technology Group/Pompeu Fabra University

When you place one side of an object onto the reactable's surface, it's like pressing a button on a synthesizer and letting a noise or a beat loop over and over again. But just putting down one block would miss the point of the reactable -- there are several types of blocks, with different shapes and sides, and where you place one in relation to another affects the outcome of the music.

­There are six different blocks, each with a unique shape and function. Square objects are sound generators -- rotating a generator changes the frequency, and dragging your finger around an animated circle can increase or decrease its amplitude (how loud or soft the sound is), much like controlling the volume on an old television set. A sound can also be cut by making a "cutting" gesture to the line that connects the object with the center of the table, and you can turn it back on by touching the animated circle again.

Squares with rounded edges are sound filters, which process sounds by adding different effects. They perform the same thing a ­guitar pedal might, adding flange, fuzz or feedback-like resonance to the sounds the instrument would normally produce. If you had a sound generator giving off a steady, even tone, adding a sound filter next to it would distort the sound to make it more interesting.

Circular objects are controllers, sending control data to the objects closest to it. This will change the frequency of the sound wave -- for instance, you could either have a steady, flowing sound that goes on cleanly and uninterrupted, or you could vary the frequency and give it more of a wah-wah shape.

Control filters (octagonal, or eight-sided) and audio mixers (pentagonal, or five-sided) are more geometrically complex, and their jobs are in fact a bit more complex. The two types act as samplers and mixers, allowing musicians to create intricate melody loops and lines that harmonize and change shape and key.

Global objects, which are hemispheric, are unique in that they have their own field, which is also in the shape of a circle, that affects every object that falls within that field. They typically provide a metronome, or keep time, for any object they affect or act as a tonalizer, correcting notes created by the sound generators and filters.

So how does the system's software turn all of this into music? On the next page, we'll take a look.

Under the reactable Table: reacTIVision 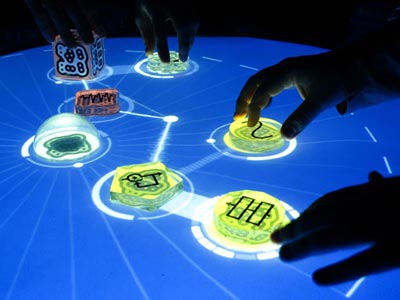 The position of each object on the reactable's tabletop surface is analyzed by the computer vision software underneath known as reacTIVision.
Music Technology Group/Pompeu Fabra University

To analyze the positions of the blocks in relation to each other, the reactable uses a computer vision (CV) system located under the tabletop surface. The CV setup is completely hidden within the machine and consists mainly of two important tools -- a camera and a projector.

Both the camera and projector point up toward the bottom of the tabletop, but they each serve a different purpose. The camera, which runs on a special vision engine called reacTIVision, looks up at the blocks and analyzes several factors:

The reacTIVision engine takes all of these positions into account, analyzes the space and sends the information to a connection manager, which does two things simultaneously. First, it passes the reacTIVision's information to an audio synthesizer, which creates the sounds the musicians are attempting to play and pumps the music out to an output source. At the same time, the connection manager sends that same information to the projector, which also points up toward the underside of the tabletop. This projector isn't taking in information like the reacTIVision camera; instead, it paints the animations onto the blue, translucent tabletop, providing the players and spectators with the appropriate visual cues to match the music coming out.

The students who made the reactable give demonstrations at music festivals, conferences and museums fairly often, so if you want to see a live performance, check the reactable's Web site for upcoming appearances. Of course, if you want to buy one for yourself, there are plans to bring the reactable to the market. (Unfortunately, no one has mentioned a price tag.) If all else fails, you could always check out Björk on tour if she still happens to favor the synthesizer and stops by your area. For lots more sonically appealing information on music and music technology, filter through the links on the next page.