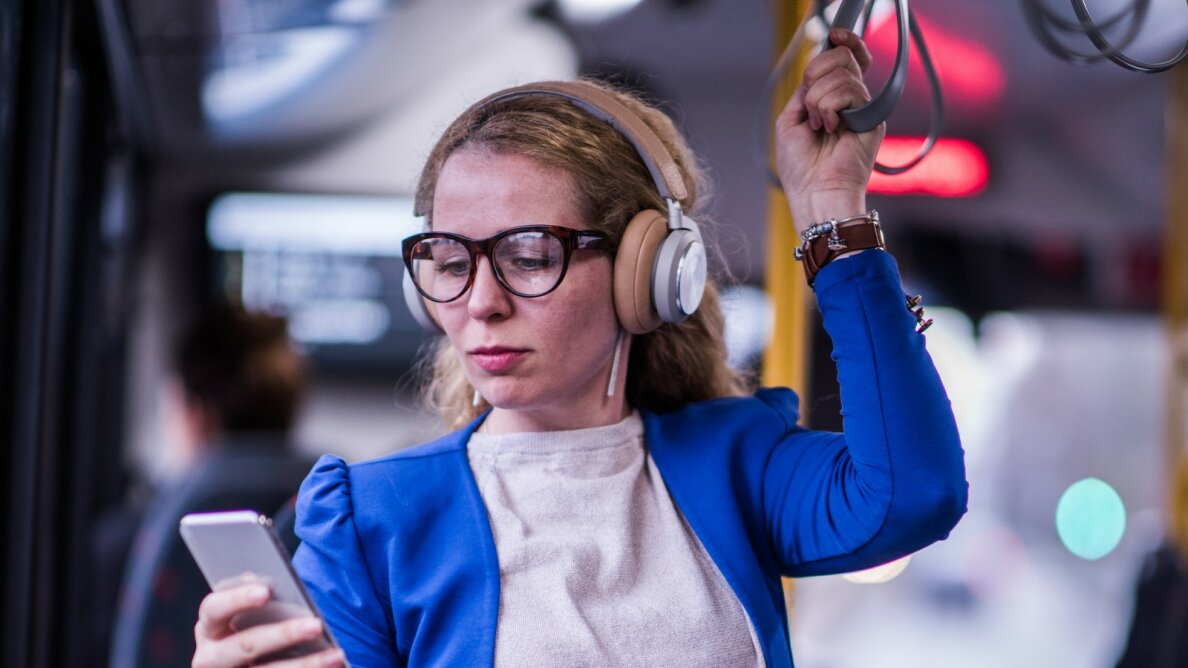 One man's noise is another man's music, but no matter what your taste, ambient noise is the enemy. Luckily, there's a piece of audio equipment designed especially to maximize your listening experience, keeping ambient noise out without sacrificing your music's sound quality. That piece of equipment is the headphone, and in this article, we're going to look at how headphones, especially noise-canceling headphones, work.

On a 1978 flight to Europe, Amar Bose, the founder of Bose Corporation, put on a pair of airline-supplied headphones, only to find that the roar of the jet engines prevented him from enjoying the audio.He started making calculations right there on the plane to see if it was possible to use the headphones themselves as a noise-reducing agent. Bose introduced the first noise-canceling headphones a decade later.

­ In order to understand headphones, you must first understand sound waves. You can check out How Speakers Work for some information, but we're also going to provide a brief introduction here.

When most people think of waves, they think of water waves, like you'd seen in an ocean or lake. A shallow water wave is an example of a transverse wave, which causes a disturbance in a medium perpendicular to the direction of the advancing wave. You can see this relationship in the illustration below. The illustration also shows how waves form crests and troughs. The distance between any two crests (or any two troughs) is the wavelength, while the height of a crest (or the depth of a trough) is the amplitude. Frequency refers to the number of crests or troughs that pass a fixed point per second.

Sound waves have many of the same characteristics as water waves, but they are longitudinal waves, created by a mechanical vibration in a medium that produces a series of compressions and rarefactions in a medium. When you pluck a guitar string, for instance, it begins to vibrate. The vibrating string first pushes against air molecules (the medium), then pulls away. This results in an area where all of the air molecules are pressed together and, right beside it, an area where air molecules are spread far apart. As these compressions and rarefactions move from one point to another, they form a longitudinal wave, with the disturbance in the medium moving parallel to the direction of the wave itself.

Longitudinal waves have the same basic characteristics as transverse waves. A compression corresponds to a crest, and a rarefaction corresponds to a trough. The distance between two compressions, then, is the wavelength, while the amount the medium compressed is the amplitude. Frequency refers to the number of compressions that pass a fixed point per second.

­For sound waves, amplitude determines the intensity, or loudness, of the sound. Frequency determines the pitch, with higher frequencies producing higher pitch notes and lower frequencies producing lower pitch notes. The brain is able to interpret these characteristics of sound, but before that can happen, the sound waves must be detected by a sense organ. That, of course, is the ear's job. To learn more about how the ear detects and interprets sound, check out How Hearing Works.

Next, we'll look at how headphones take advantage of some of these same principles to help people hear music, books on tape or other recorded material. 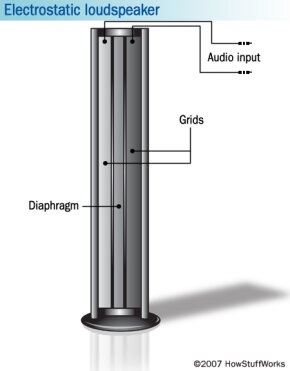 To hear what's recorded on a record, cassette, CD, DVD or MP3 player, data stored on the medium must be converted into sound waves. This requires that the stored information be turned into an electrical signal, which then must pass through a transducer to convert the transverse electrical wave into a longitudinal sound wave that the ear can interpret. Speakers play the role of transducers in audio systems. They can be located far away from the listener's ear, however.

Headphones were developed specifically to solve this problem. Headphones are essentially speakers held over the ear by a band or wire worn on the head. They are categorized by the type of transducer technology use and by their construction. Let's look first at electrostatic headphones.

Electrostatic headphones take advantage of a phenomenon that most people know as static electricity. When an object becomes charged, it either gains or loses electrons. An object that gains electrons is negatively charged; an object that loses electrons is positively charged. Objects with like charge experience repulsive forces, while oppositely-charged object experience attraction. These forces are known as electrostatic forces.

To create these forces in electrostatic headphones, a thin diaphragm -- a flexible sheet made of paper, plastic or metal -- is suspended between two metal grids or electrodes. When an audio signal is applied, varying attractions are created along the grids. This pushes part of the diaphragm toward one grid and pulls part toward the opposing grid. The resulting vibrations in the diaphragm produce the sound waves that are eventually detected by the ear.

Electrodynamic (or dynamic, for short) headphones are made of three functional parts -- a voice coil, a permanent magnet and a cone-like diaphragm. The narrow end of the cone is attached to the voice coil and actually generates the sound waves. It does this by vibrating rapidly in response to the vibrating voice coil, much the same way the three bones of the ear vibrate in response to the movement of the eardrum.

The vibration of the voice coil is made possible by two fundamental properties of magnetism:

When a voice coil is placed within the unchanging magnetic field of a permanent magnet, these two properties are realized. Switching the electrical signal that is pumped into the coil causes the North and South poles to switch back and forth very rapidly. As the North and South poles of the voice coil's magnetic field switch, they are attracted and then repelled as they interact with the permanent magnet. Because the permanent magnet is fixed and the voice coil isn't, the latter vibrates and transmits these vibrations to the diaphragm.

We'll look at some common dynamic headphone styles in the next section.

As the introduction to this article suggests, differentiating music and noise can be a subjective matter. But scientists make a clear distinction. Music is sound with a reproducible, distinct waveform. Noise refers to random and unpredictable waveforms. And white noise is the most complex type of noise because it contains many different frequencies, all possessing equal intensity. 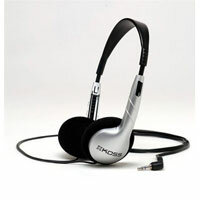 Dynamic headphones are the most common type of headphone, so let's take a closer look at the three basic earpiece designs.

Supra-aural headphones, also known as on-ear, open-back or open-air headphones, sit lightly on or over the ear. The ear cups are generally softly padded and rotate freely to enhance fit and reduce pressure points. Because they sit on the ear, on-ear headphones leak sound into the external environment and allow ambient noise in.

Circumaural headphones, also known as around-ear or closed-back headphones, completely enclose the listener's ears. Because they form an airtight seal, they block out external noise without leaking sound to the outside. This improves sound quality, but circumaural headphones tend to be heavier and less comfortable.

We'll look at exactly how noise-canceling headphones manage to "cancel" noise next. 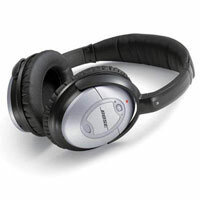 Unfortunately for music lovers, many types of ambient sounds can interfere with or even block the sounds coming through their headphones. If you have ever tried to listen to a CD or MP3 player on a plane, then you know the problem well: The roar of the engines makes it difficult to hear what's being piped through the speakers -- even when those speakers are situated in or on your ear. Fortunately, noise-canceling headphones can provide a more enjoyable listening experience.

Noise-canceling headphones come in either active or passive types. Technically speaking, any type of headphone can provide some passive noise reduction. That's because the materials of the headphones themselves block out some sound waves, especially those at higher frequencies. The best passive noise-canceling headphones, however, are circum-aural types that are specially constructed to maximize noise-filtering properties. That means they are packed with layers of high-density foam or other sound-absorbing material, which makes them heavier than normal headphones. The tradeoff of all that extra weight is a reduction in noise of about 15 to 20 decibels (dB). But considering jet engines create 75 to 80 dB of noise inside the aircraft cabin, passive models have some serious limitations. That's where active noise-canceling headphones come in.

Active noise-canceling headphones can do everything that passive ones can do -- their very structure creates a barrier that blocks high-frequency sound waves. They also add an extra level of noise reduction by actively erasing lower-frequency sound waves. How do noise-canceling headphones accomplish this? They actually create their own sound waves that mimic the incoming noise in every respect except one: the headphone's sound waves are 180 degrees out of phase with the intruding waves.

If you look at the illustration below, you can see how this works. Notice that the two waves -- the one coming from the noise-canceling headphone and the one associated with the ambient noise -- have the same amplitude and frequency, but their crests and troughs (compressions and rarefactions) are arranged so that the crests (compressions) of one wave line up with the troughs (rarefactions) of the other wave and vice versa. In essence, the two waves cancel each other out, a phenomenon known as destructive interference. The result: the listener can focus on the sounds he wants to hear.

Of course, several components are required to achieve this effect:

While noise-canceling headphones do a good job distinguishing between the audio a wearer wants to hear and the background noise he or she wants to keep out, some people say that they compromise sound quality by muffling sounds. Users can also experience a change in air pressure, although ports built into the ear cup are meant to vent air trapped behind the speakers.

In spite of these tradeoffs, many people would never go back to normal audio headphones. That's because noise-canceling headphones do more than reduce noise. They also help alleviate fatigue when traveling, which can result from exposure to low-frequency noise for an extended period of time. You can even use noise-canceling headphones if you don't want to listen to another audio source but do want to cancel out background noise. And a little bit of quiet can be music to anyone's ears.

For lots more information on noise-canceling headphones and related topics, check out the links on the next page.

A decibel (dB) is a measure of sound intensity. The dB scale is logarithmic, meaning that a change of 10 dB represents a tenfold change in loudness. So, a sound measuring 30 dB is 10 times louder than a sound measuring 20 dB.

Bose, of course, is a pioneer in developing innovative audio systems. In many ways, Bose could be described as a company dedicated to the pursuit of applied science. Amar Bose, an MIT scientist, founded the company in 1964, taking observational data about sound -- and people's perceptions of sound -- and turning it into useful products. The first of these products was the 901 Direct/Reflecting speaker system, released in 1968. Noise-canceling headphones came later, but they evolved in a similar way, moving from the laboratory bench to the retailer shelf. In fact, as the article explains, Amar Bose first conceived of noise-canceling headphones while on a noisy commercial flight. That image -- of a classically trained scientist trying to solve an everyday problem, scribbling his thoughts on a cocktail napkin at 35,000 feet (10,668 meters) -- stayed with me throughout my work on this article.

Stuff You Need to Know: