Jukin' Into a New Age 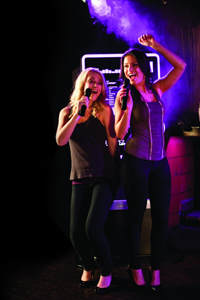 Jukeboxes keep evolving. These days, Internet-connected machines let you play just about any song you can think of, and some even have integrated karaoke capabilities.
Courtesy TouchTunes

You're in a murky, smoke-filled biker bar, one that's way off of the main highway in West Texas. Tattooed, grungy men and women play a quiet game of pool. They exchange menacing glances with outsiders. Suddenly, the Spice Girls begin blaring from the Internet jukebox. Shortly thereafter, the clueless dolt who played "Wannabe" is dying a slow, painful death in the bar's back alley.

Contemporary jukeboxes are often wall-mounted boxes with a touchscreen that let you choose from songs stored to a hard drive. Some might take quarters, but they all accept credit cards. Many are connected to the Internet and let you pick from thousands of additional songs, although those selections might cost you twice as much as those on the local drive.

Plenty of people are ambivalent about Internet jukeboxes, in part because some feel that these machines homogenize gathering places. Now, you can play Britney Spears in a biker bar (at your own risk), whereas in the past, that same bar may have stocked only CDs with Hank Williams and Slayer.

There's also a weird flip side to the idea that Internet jukeboxes offer a bigger selection of songs. Due to copyright and licensing issues, many artists and songs just aren't available. With a CD jukebox, though, a bar owner could load discs with just about any music they preferred.

But digital is just easier. Because of digital music's proliferation and convenience, jukeboxes that play vinyl records and even CDs are getting rarer by the day. Mechanical parts break, and it's harder and harder to find replacements and people with the expertise to repair them.

Plus, newfangled jukes have features like built-in karaoke, as well as the ability to capture and print pictures on the spot. Those kinds of features hold great appeal to a generation accustomed to always-on multimedia.

Some contemporary jukeboxes are built to recall their glory days, complete with fanciful curves, lights and glass ... but with a digital twist, in which you can connect a handheld music device. These machines make not give new life to jukeboxes, but they harken to a different era – one in which music-on-demand first captured the attentions of music-starved people the world over.