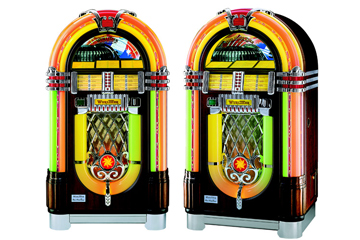 Gramophone discs had the same kinds of grooves as cylinders, but they came in flat disc form, making them less unwieldy and cheaper to manufacture. A format war of sorts (think cassettes versus CDs) ignited for a few years in the early 1900s but discs quickly won out, specifically 78 RPM (revolutions per minute) discs that became the go-to standard.

Disc format made record changing easier, too. Machines like Gabel's Automatic Entertainer even had a record changer so that customers could choose from multiple 24 recordings. Thanks to its totally automatic machine functionality, the Entertainer is considered the forerunner of all modern jukeboxes.

Yet even fancy song selection capabilities couldn't propel the jukebox into true popularity, for a couple of reasons. One, coin-operated player pianos were exceedingly popular throughout the country, and people gathered en masse to watch these curiosities. The second problem was volume. Even with clunky earphones, phonographs produced tinny, soft sound that was often overwhelmed by ambient public noise, much less the chaos of beer-soaked patrons. Coin-operated phonograph production stalled.

It wasn't until 1927 that the jukebox boom, figuratively and literally. That's the year that Automated Musical Instruments (AMI) first integrated an electrical amplifier into a jukebox. Now, customers could bypass ridiculous earphones and pump loud music just about any place. Instead of standing or sitting stationary, they could dance, flail about and generally unleash their rock-and-roll demons at full volume, especially as Prohibition ended in 1933.

But just as better jukebox technology and more abundant records were catching fire with café and bar owners and their patrons, the Great Depression took hold. Music sales nosedived for years, down from $75 million in 1929 to only $5 million four years later [source: Encycopedia].

In spite of the Depression, the sales of amplifier-equipped jukeboxes actually increased. And then jukeboxes happened to be at the right place at the right time. On the next page, you'll see how social and technological forces collided into a flashpoint for a jukebox explosion.