From Phono to Mono 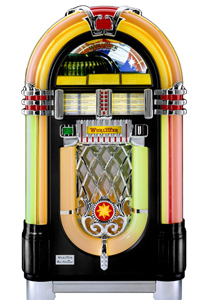 This is the Wurlitzer 1015, one of the most famous and iconic jukeboxes ever. Its jazzy styling echoed society’s post-World War II euphoria.
Courtesy Gibson

Before jukeboxes, there were phonographs, a brainchild of none other than Thomas Edison. These machines accepted grooved wax cylinders, in which the grooves represented recordings. As the cylinder rotated, a needle traced the grooves and vibrated to reproduce sounds on the cylinders. In short, they worked similarly to contemporary vinyl record players.

Phonographs were simple devices, but they helped introduce a new way of paying for music. It all started with the aptly named "nickel-in-the-slot" machines (later known as nickelodeon or automatic phonographs) built by Louis Glass in San Francisco.

Glass first introduced his coin-operated phonograph at the Palais Royal Restaurant in 1889. Curious customers stood around the machine, inserted a nickel and then listened to short (roughly two minute) songs. The machines were often hand-wound and used springs to move internal mechanisms, but battery-powered types were available as well.

In this time before amplifiers, big speakers and electronic headphones, only stethoscope-like earphones made music audible. Once the song ended, you wiped off the earphones with towel and the next eager group of listeners took their seats. Others featured a small horn that played music just loud enough for a small, relatively quiet room. Recordings were limited and the cylinders were swapped manually, so songs changed only periodically.

The technology might have been rather rudimentary, but the pay-for-play concept was revolutionary. Glass made more and more machines and to keep up with demand for this new type of music player. As a result, they got more dependable, easier to make and the purchase price dropped to a point that even small bars could afford them.

Those bars and cafes were often called juke joints, especially in the Southeastern United States, where the word juke had been a part of African-American lexicon for many years. Juking was slang for dancing – or ultimately just cutting loose – after a long, exhausting day of labor.

Juke joints gained reputations as rowdy places with loud music and loud parties, thanks in part to the new music machines that fueled the fun, even when the band was too tired to play or too expensive to hire. In time, these machines become known as jukeboxes.

But there were a few notable developments that happened before jukeboxes really hit the mainstream. On the next page you'll see how other technologies put really serious jive in the jukes.