by Patrick J. Kiger
Prev NEXT
6 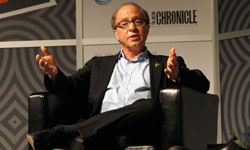 As a 13-year-old, the New York City-born Kurzweil used telephone parts to fashion a calculator that could find square roots, and by the time he reached Massachusetts Institute of Technology in the late 1960s, he'd already founded a successful analytic software company and sold it for $100,000. In the decades that followed, Kurzweil dreamed up a slew of world-changing innovations, ranging from optical character recognition software to voice and music synthesizers. But the man who arguably is America's greatest living inventor -- Inc. magazine once called him the "rightful heir to Thomas Edison" -- probably has achieved even more fame as a futurist.

Kurzweil wasn't the first to predict that machines eventually would eclipse human intelligence, but he's boldly put a date on the Singularity, as futurists call that anticipated event. In a 2005 essay, Kurzweil declared that by 2045, "nonbiological intelligence," as he calls it, will not only have surpassed human capabilities, but will be 1 billion times smarter than the cumulative total of human thinking ability today. But Kurzweil isn't afraid that some malevolent machine will decide to destroy the human race, the scenario depicted in the "Terminator" film series. Instead, he anticipates a future in which human and machine intelligence will blend together to achieve even more amazing innovations and progress. Kurzweil also envisions humans becoming increasingly artificial in other ways, as well. By the early 2030s, he predicts that most of our internal organs will have been replaced by tiny robots, which will last longer than flesh and work more efficiently [sources: Wolf, Kurzweilai.net].