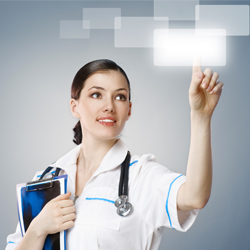 What will world healthcare look like in the years to come? Futurists have a few good ideas.
iStockphoto/Thinkstock

Healthcare is always a hot-button topic, especially in the United States. No matter what their stance on legislation that's passed or proposed, many Americans would agree that the system needs improvement. In 2011, the U.S. spent about $7,960 per person on healthcare. By contrast, many of the other countries in the OECD (Organization for Economic Co-operation and Development) spent $3,233 per person. And yet the World Health Organization ranks the U.S.'s healthcare system 37th in efficiency. Spending more money doesn't make things better. And we have growing rates of obesity, heart disease, type II diabetes and other diseases that are caused or influenced by poor health habits. Something has to change.

And change it will -- just ask any futurist who makes healthcare forecasts. According to the Association of Professional Futurists, a futurist is a person who "uses foresight to describe what could happen in the future, and in some cases, what should happen in the future." We're not talking about psychic friends here -- futurists are usually scientists, and they study and analyze trends to come up with possible scenarios. They think long-term and big-picture, so current legislation may not even figure into their forecasts. With that in mind, let's take a look at five futurist predictions in the world of health.