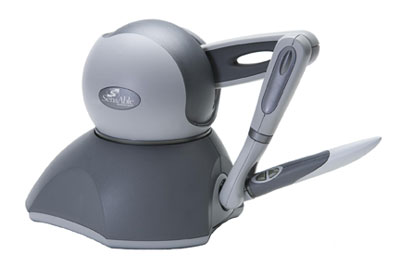 There are several approaches to creating haptic systems. Although they may look drastically different, they all have two important things in common -- software to determine the forces that result when a user's virtual identity interacts with an object and a device through which those forces can be applied to the user. The actual process used by the software to perform its calculations is called haptic rendering. A common rendering method uses polyhedral models to represent objects in the virtual world. These 3-D models can accurately portray a variety of shapes and can calculate touch data by evaluating how force lines interact with the various faces of the object. Such 3-D objects can be made to feel solid and can have surface texture.

The job of conveying haptic images to the user falls to the interface device. In many respects, the interface device is analogous to a mouse, except a mouse is a passive device that cannot communicate any synthesized haptic data to the user. Let's look at a few specific haptic systems to understand how these devices work.