by William Harris
Prev NEXT
3 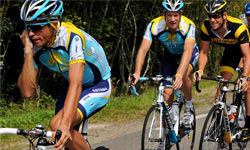 Alberto Contador (L) of Spain and team Astana looks like he might need a charger soon as he chats away while training during the 2009 Tour de France.
Jasper Juinen/Getty Images

Believe it or not, more people in developing countries use cell phones than people in developed areas. According to some research, between 80 and 95 percent of the population of Kenya, Mexico and Indonesia send text messages on their mobile devices [source: Mlot]. But even if family members living in a poor African community have cell phones, they might not have electricity to charge them. So what do they do? Many must charge their phones at kiosks for a small fee.

With a little know-how and just a few materials, you can build your own bicycle-powered cell phone charger. In addition to a bicycle headlight generator, you'll need some basic electronics -- circuit board, rectifier, capacitor and voltage regulator. First, you attach the generator to either the front or back wheel of your bike. Next, you cut the cord on your cell phone charger to expose the positive and negative wires. Now mount the electronic components on the circuit board and wire everything together: generator to rectifier, rectifier to capacitor, capacitor to voltage regulator, voltage regulator to cell phone charger. Finally, cover the components with electrical tape and mount the circuit board just under the seat post. The charger itself can rest in a basket or in a bag attached elsewhere on the bike frame.

When it's time to hit the streets, attach your cell phone to the charger and start pedaling -- the faster or farther you go, the more juice your phone gets. Just remember not to bike and text at the same time.