by William Harris
Prev NEXT
8 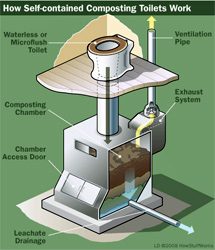 This isn't exactly Deshusses and Schaad's design for a composting toilet, but it does illustrate the basic idea.
© HowStuffWorks

The sound of Archie Bunker's flushing toilet was always good for a chuckle or two. But in many rural communities across the world, sanitary waste disposal is no laughing matter. According to the World Health Organization (WHO), nearly 2 billion people live without appropriate sanitation facilities and services. As a result, bacteria and viruses from human waste ends up in the water supply, leading to a number of diseases, including dysentery, typhoid and cholera. Two million people, mostly children, die from these diseases every year, says WHO.

Flushing toilets, which require large amounts of water and a complex sewage system, aren't the answer. A truly effective solution will require no electricity and will be both inexpensive and easy to construct from readily available materials. Enter the composting toilet, a bioreactor system that converts waste to biogas, which is then burned and superheated by a heat exchanger to sterilize the treated effluent. The concept is the brainchild of Duke University scientists Marc Deshusses and David Schaad, who won a $100,000 Gates Foundation grant in 2011 to develop the idea.

Although the design hadn't been finalized at the time we wrote this, the system will contain a sealed chamber, likely made of $100 worth of PVC, which will receive solid waste. In this oxygen-free environment, anaerobic bacteria will chow down, breaking down the waste and producing methane gas. Instead of releasing the gas, however, the system captures it and burns it. This final step is important because it does two things -- it kills harmful pathogens and keeps methane, a powerful greenhouse gas, out of the atmosphere. So we can treat our poop without pooping on the environment.