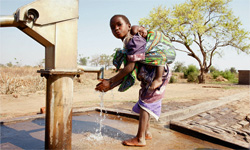 A low-cost water pump is just one of the things that made our list.
Mark Mainz/Getty Images for HELP Malawi Foundation/Getty Images

In the United States, where most people have access to safe shelter, clean drinking water and sanitation services, it's easy to think poverty doesn't exist. Statistics tell a different story. More than 1 billion of the world's almost 7 billion people live on less than $1 a day [source: The Earth Institute]. In hard-hit areas such as sub-Saharan Africa, Haiti and South Asia, children are particularly vulnerable. Millions die each year from starvation and diseases such as malaria and AIDS. Few receive a formal education, and even fewer have access to health care.

One solution, of course, is to encourage affluent nations to contribute dollars toward international poverty assistance. Another is to donate products and services to countries in need. For example, the nonprofit One Laptop per Child delivers low-cost, Linux-based laptops to children of developing nations. Since 2005, the organization has made millions of computers available in the Americas, Africa and Southeast Asia, with the goal of giving poverty-stricken kids "a window out to the world and a tool with which to think."

Another solution is to share knowledge and experience with at-risk communities so they can develop their own technologies using local resources. Some projects, such as installing a micro-hydroelectric system in a small village, can be quite ambitious. They require a large number of parts, from turbines and pipes to batteries and inverters, as well as an understanding of power generation. Other projects don't have the same scale, yet still deliver tremendous benefits. Often, the impact of even simple, do-it-yourself devices can be profound, helping people improve their living conditions and lead healthier lives.

In that spirit, we've gathered a collection of homebuilt technologies that can be put together using easy-to-find resources and limited understanding of science and engineering. Our goal was to describe projects that could benefit destitute populations in developing nations, but would also appeal to MacGyver wannabes and missionaries of sustainable living.