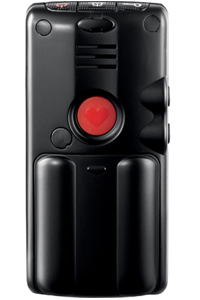 The back of the Clarity cell phone has a panic button.
© Clarity

At the 2009 Consumer Electronics Show (CES), a special conference called the Silvers Summit formed to discuss technology designed for senior citizens. One of the companies involved in the summit was Clarity, a division of Plantronics Inc. Clarity had introduced a new cell phone to the market just two weeks before CES. It was a cell phone designed for the senior citizen market.

It looks like a very simple cell phone. That was a deliberate design decision -- Clarity wanted to avoid creating a device that would intimidate or confuse customers. While the handset interface is straightforward, the phone has a sophisticated programming system on the back end. According to van den Bergh, Clarity designed the phone with the intention of selling it to the caregivers of elderly people.

The Clarity phone has a textured case that makes the device easier to grip. It also has a slide-out keypad with buttons that are larger than the ones you'd find on a typical cell phone. However, you don't have to slide out the keypad to make every call. The front of the phone has four large buttons. One button is the call button, one is the end call button and the other two allow you to navigate through the phone's contact list.

The phone's oversized screen has a yellow backlight and displays contact names and numbers in a large font. Clarity chose the color yellow for the backlight because as we age, we lose visual sensitivity -- our ability to perceive certain colors starts to fail. In fact, we begin to have difficulty seeing colors belonging to the shorter wavelengths of the visible spectrum [source: Munsell Color Science Laboratory]. Yellow light has a longer wavelength , making it one of the easier colors to see.

­The National Institute on Aging says that one-third of senior citizens between the ages of 65 and 74 have hearing loss. And about half of all elderly people over the age of 85 have hearing problems. The Clarity phone incorporates an amplifier in the phone's speaker. According to the company, the amplifier makes the Clarity phone twice as loud as ordinary cell phones.

Thanks to Jamie van den Bergh, Vice President of Sales & Marketing for Clarity, for his help with this article.