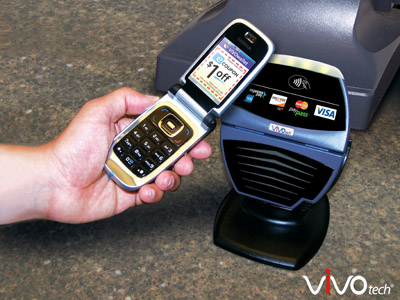 You're on your way home with a few errands to run and only your cell phone to help. From work, you walk to the commuter train station, where you touch your cell phone to a near field communication (NFC) reader to pay your fare. On the platform, you stand near a poster advertising a movie you'd like to see. You touch your phone to the NFC tag on the ad to download details about the film, including where and when it'll be playing and the URL for a Web site to visit to order e-tickets.

When you reach your stop, you go to the bookstore, where you use your phone to redeem a discount coupon and buy a DVD. The next stop is the dry cleaners, and again, you touch the phone to the NDC reader to pay your bill.

The last stop is your favorite restaurant for carryout. You sent a text order from your phone, so the food is ready and waiting. Another touch of the phone to a reader, and you're ready to head home for a relaxing dinner and a chance to watch that new DVD.

The cellular electronic payment described in this scenario may seem futuristic, but consider that:

All of this may have you wondering: How does electronic payment with a cell phone work? How available is this type of payment? And what are the security risks? Keep reading to learn more, starting with the technology behind cellular electronic payments. 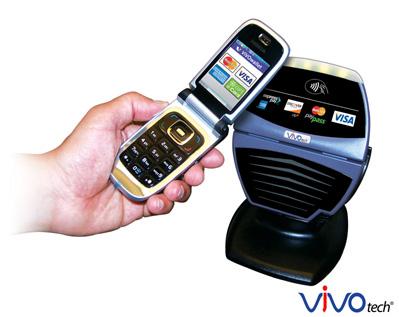 To pay using a cellular phone, users just point it at a card reader.
Image courtesy of VivoTech

Near field communication is at the heart of cellular electronic payment, so any explanation of cellular payment needs to start there. What exactly is NFC? It's a short-range wireless communications technology standard that allows electronic devices to communicate with each other, for example, to make a cellular payment. Using a short-range radio frequency, an NFC reader can read data from a tag or another device placed very close to it [sources: Nokia Europe and NFC Forum].

It's similar to the radio frequency identification (RFID) technology used in wireless inventory tags, contactless credit cards and transit cards that you can touch to a reader. NFC and RFID both transfer data via inductive coupling. Induction occurs when a wire or other conductor of electricity passes through a magnetic field, generating an electric current in the wire.

But NFC connectivity can do more than RFID solutions, which is particularly useful for electronic payment. NFC offers two-way communications, so the payment station can send information like discount coupons or carry on a conversation with the chip in the phone. That also offers added security. The pay station, for example, can request account information from the chip, which can ask for time for the user to enter a password on the keypad. The devices can keep the connection open until account and security information is provided and the transaction approved.

Are you ready to give it a try? Analysts anticipate a booming market for NFC technology, predicting that the number of annual cellular electronic payments will increase fivefold by 2013, with mobile phone users spending more than $300 billion worldwide each year on digital goods (such as music, tickets and games) and physical goods (such as gifts and books).

However, a few obstacles stand in your way. The first is that you need a cell phone equipped with an NFC chip. No problem with that, if you live in Japan. The phones also are becoming more common in Europe. In fact, the Far East and Western Europe are expected to represent 60 percent of cellular electronic transactions worldwide in 2013 [sources: Juniper Research].

But the NFC-enabled phones aren't expected to be available for purchase in the United States until 2009 at the earliest. They have been tested in pilot studies, including for ticketing on the Bay Area Rapid Transit System in San Francisco, with the MasterCard PayPass processing system in Chicago and with 600 merchants accepting PayPass in New York and on a line on the city's subway [sources: MSNBC].

While the response from consumers has been positive, stores, restaurants, ballparks, gas stations and other retail establishments need to see enough value in cellular electronic payments to install NFC technology and adapt applications on their end to work with enabled cell phones.

Beyond any reluctance to accept cellular electronic payments, many merchants are not ready to do so. M.V. Rajamannar, executive vice president for CitiGroup's Citi Brands, estimated after the New York City study that only about 40,000 of the nation's more than 6 million merchants were equipped with contactless readers [source: Card Technology].

Despite their convenience, cellular electronic payments have many critics. Find out what they're saying on the next page. 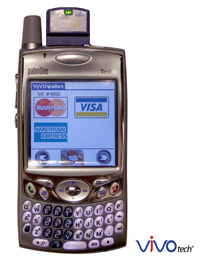 One way of looking at cellular electronic payment is to think of your cell phone as an electronic wallet that eliminates the need to carry plastic credit cards. That might encourage you to keep better track of your phone, but how safe is each cellular payment transaction?

Proponents say these transactions are quite safe, noting that:

Wireless carriers and mobile application developers are looking at ways to make cellular electronic payments even safer. Cellular South has experimented with biometric technology for its Wireless Wallet phone. A fingerprint scanner was used to verify identity, eliminating the need to remember a PIN or pass code [source: Cellular South].

Infineon Technologies, a German semiconductor manufacturer, has developed a high-security flash microcontroller that's integrated into the SIM card for an NFC-enabled cell phone. The microcontroller adds a firewall to protect financial information during transactions [source: Infineon].

The NFC Forum, a nonprofit industry association, also is working on the issues of security and privacy for cellular electronic payments. The forum's privacy advisory council was formed to address consumers' concerns.

Despite potential security concerns, many cell phone users who have taken part in pilot tests say they would like to continue using NFC-enabled phones to make cellular payments. More than 75 percent of the participants in Cellular South's three-month trial of the Wireless Wallet said they were satisfied with the payment transactions using the phone, for example, and 87 percent said they were interested in using the cell phone when it becomes available [source: Cellular South].

In New York City, 84 percent of the participants in AT&T, CitiGroup, MasterCard and Nokia's pilot study said they'd like to keep using the Nokia phones. So while it's uncertain how soon the Wireless Wallet and similar cell phones will reach store shelves, some customers will be waiting [source: Laptop].

For lots more information about cellular electronic payments and related topics, see the links on the next page.