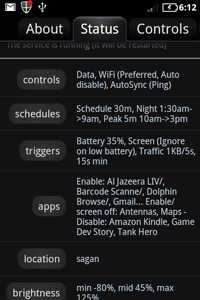 Battery-saving apps like Juice Defender claim to rein in unnecessary energy consumption so your smartphone charge lasts longer. But do they really work?
Screenshot by Nathan Chandler

Smartphones have humungous, bright screens, an arsenal of wireless receivers and transmitters, and lickety-split CPUs. Mobile battery technology is struggling to keep pace with this onslaught of demands; some last for only 5 hours of heavy use before they go belly up.

That's why smartphone app developers tout battery-conservation apps. These programs purport to save battery life by clamping down on unnecessary tasks, ensuring that your phone is running only the apps you really need at any given moment.

For example, some apps are notorious for launching themselves, incessantly downloading updates and notifications, or basically lurking in the background of your phone while you perform other tasks. In the process, they consume CPU time and battery life.

Other apps suffer from design issues or outright flaws (called bugs) that cause them to draw unnecessary power. Researchers at Purdue University recently unveiled data indicating that the popular game Angry Birds and Facebook (along with plenty of others) blew as much as three-quarters of their energy consumption not on the app itself but on the third-party ads displayed to each user (Source: Microsoft).

Bugs mean one thing: It's time to break out the roach killer, right? Download a battery-saving app to shut these programs down and keep them down and, logically, your battery life improves. Well, maybe.

On the next page, we'll show you how battery-saving apps are supposed to work, how they might help -- and how in some cases, they can be downright sinister and destructive. 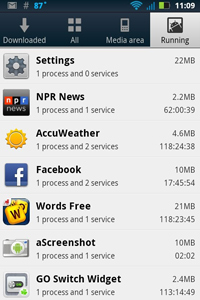 Think you know which apps are currently running and eating up your battery life? You might need to think again. Many apps run continuously even when you try to kill them.
Screenshot by Nathan Chandler

Let's start with the most basic and most important app tip. If you see a battery-saving app advertised within another app, perhaps as an annoying, flashing animation that warns you about your battery's imminent death, don't tap it.

These so-called apps are sometimes malware (malicious software) that in some cases actually try to steal your personal information. Download your apps instead from your service provider or authorized store, and only after reading other user reviews indicating that the app is legit.

How these apps work their supposed magic varies by developer. Some battery conservation apps are so-called task killers, which automatically shut down apps that attempt to launch themselves.

In theory, this is a great idea, but in some situations, those same apps will simply restart themselves, and then get shut down again, in a never-ending cycle that perhaps drains your battery even faster than before. Others also shut down both idle and active apps, which can wreak havoc on your phone's overall efficiency.

There's a better way to conserve battery life. On the next page, we'll show you how other apps can help. 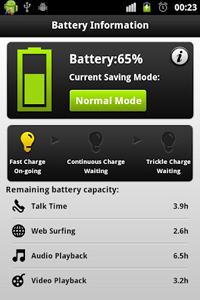 Battery Saver is one of numerous apps that offer several user profiles customized to specific smartphone user profiles. Pick the right profile and you’ll save power; pick the wrong one and you may use more power than without the app.
Screenshot by Nathan Chandler

Task killers might be a dubious way to save your battery charge. Other apps are more judicious in the way they lop off the heads of energy-sucking monsters. JuiceDefender is one such app. Rather than killing apps, it automatically turns off power-greedy components when you're not using them. For instance, when you're not near a WiFi signal, the app knows to turn off the WiFi transceiver in your phone.

Easy Battery Saver works similarly. Furthermore, you can engage various modes (General Saving, Super Power Saving, etc.) customized to your preferences and schedule. Still, you'll need to be mindful of the way you deploy such apps.

Abhinav Pathak, a Ph.D student candidate in the computer engineering department at Purdue University, worked with a team of researchers who tracked smartphone energy expenditures. He compares a smartphone to a house; battery-saving apps make sure the lights are turned off when no one's home and that the furnace is off when it's hot outside. For these purposes, an app may help.

But Pathak says these apps can't detect problems with other apps that use far more energy than they should. Specifically, he found that many apps are improperly programmed, and as a result, use far more energy than they should. For example, an app that uses GPS services may fail to shut off your phones GPS device even after you exit the app, meaning your phone relentlessly hemorrhages power.

For these kinds of problems, users have to hope that developers start taking more care when creating apps. In extreme circumstances you may just have to uninstall a problematic app instead of letting it suck the life out of your phone.

On the next page, we'll explain more about the best ways to slow battery drain and maximize your smartphone power serenity. 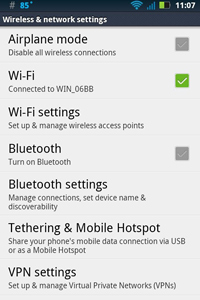 By turning off components that you’re not actively using, such as WiFi, battery-saving apps cut down on the power you need and lengthen time between charging sessions. You don’t even need an app to perform such tasks.
Screenshot by Nathan Chandler

Understand that a battery-saving app that works great on one device might not accomplish much on another. Be sure to read user reviews for apps that work best on your handset. Also know that apps aren't the only way to save your battery. Just learn to be smart about when you're engaging some of your phone's gadgetry.

For example, turn off networking capabilities when you're not using them. Bluetooth and WiFi will constantly search for signals and drain your battery. Manage the update frequency of your apps. Some constantly search for the latest updates, which requires both CPU time and a network connection.

Many phones have their own integrated power-saving modes, too. Twirl through the settings or do a quick keyword search online and you'll have instructions for using any built-in modes on your device.

No matter if you save power manually or with an app, keep tabs on the way your phone uses power. An app called Carat, developed by the University of California, Berkley, performs an in-depth analysis of your phone's systems and offers recommendations for improvement.

Or, you can look for an extended-life battery. With many smartphone models, you can buy such batteries which last much longer than standard batteries.

Sure, smartphones inevitably need a whole lot of power. After all, they offer a nearly limitless number of capabilities in a pocket-sized machine. It could be years before battery technology catches up to your smartphone's power need, but in the meantime, you have a whole range strategies for conserving life at your fingertips, including battery-saving apps.

I carried my first forearm-sized cell phone for six years. In that time, I never replaced the battery and charged it roughly 12 times. That's perhaps exaggerating a bit, but then, that particular phone was good for one thing -- phone calls. I never used it for movies, gaming or other heavy-duty tasks.

So it was a bit of a shock to graduate to a smartphone, only to find that I'd have to charge the thing twice per day. I actually conditioned myself to use it less and less in order to spare the battery's charge in the event I needed it for an emergency. But avoiding technology because you're afraid of short battery life seems silly.

Now, I know a lot more about ways to force my phone to sip power instead of sucking it down like mad. Between smarter manual strategies like dimming the screen to battery-saving apps, a single charge lasts much longer and keeps me much happier.