by Stefani Newman
Prev NEXT
5 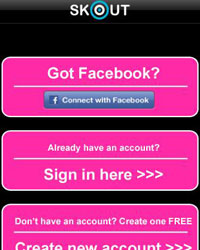 Forget sitting in front of your computer for hours looking for a date or a mate. Skout capitalizes on its users' smartphone GPS technology to find someone near them while they're out and about.

Here's how it works: Register by entering some information about yourself, including your age, gender, photos and a description of your hobbies and interests. You can then search for people within your general area, and a grid will appear with photos of people nearby and how far away they are from you. You can choose to chat, "flirt" via games, send private messages, be alerted when someone new is nearby, as well as see who is checking you out and adding you to their "HotList."

One of the first location-based dating applications developed, more than 5 million users have signed up for Skout since it launched in 2009 [source: Li]. In May 2010, Skout launched the first iPad app of its kind, revolutionizing dating for the mobile and digital age [source: Katims]. Skout apps are also available for the iPhone and iPod Touch, as well as Android phones.

If you think it's a little creepy to track people around you, you're probably in the minority. Skout says more than a million messages are sent to its users daily, and the app's average user spends 40 minutes a day using the service [source: Manninen]. The typical Skout user is in his or her 20s, looking to flirt and have fun rather than have a serious relationship [source: Rosenbloom]. Aside from finding people to hang out with, you can also use the service to find a hot spot in your city or if you're traveling. For safety reasons, Skout never reveals your exact location or phone number, and you can turn off the location function if you choose [source: Sutter].

The basic Skout app is free, but the Scout+ version for the iPhone costs $3.99, which eliminates banner ads and frees up more space on your phone screen. There's also a point system for services such as sending virtual gifts to a certain number of other users. Those points can be bought for various prices, ranging from $4.99 for 500 points to $41.99 for 7500 points, and are considered "in-app" purchases, once you start using Skout.