How to Shoot Good Photos at Night 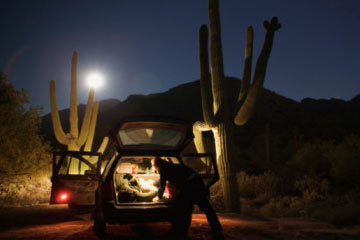 The nighttime is the right time. After the sun sets, pull out your camera and create some unforgettable images.
Photo Brand X Pictures/Thinkstock

Photography is all about capturing fleeting fragments of light. From sunup to sundown, photographers manipulate shadows and light to create striking images, and many pack their gear away when sunlight fades. But those shooters are missing out on some seriously fun photo opportunities: Nighttime presents an entire world of picture-making possibilities.

Since most film cameras today are disposable or for the pros, we'll restrict our focus to digital cameras. However, it should be noted that many of these same concepts apply to film photography, too.

There are some technical challenges specific to nighttime shooting with a digital camera. Your camera has a sensor that's light-sensitive and optimized for daytime use. That's why a camera's basic automatic mode isn't much good for nighttime shots unless you want nothing but flash-filled snapshots. To take better (and more creative) night pictures, you'll need a solid grasp of a few manual features on your digital camera. You'll also need a good dose of patience and a willingness to explore your camera's capabilities.

Thanks to the LCD screen on your digital camera, you can quickly review your images and make adjustments until you've created the picture your imagination desires. You can play with motion blur (think of moving cars and fireworks), capture epic star trails or maybe even catch eerie moments from a game of flashlight tag.

You can certainly turn on the flash and take pictures in the dark; entire books have been written about creative applications of flash. But to keep things simpler, we'll focus on flashless night pictures.

Keep reading to learn how you can use your camera to take great pictures at night. With just a little preparation and a basic understanding of a digital camera's manual features, you'll be able to compose fun, artful pictures even after the sun blinks out and shadows rule.

Tips for Taking Photos at Night 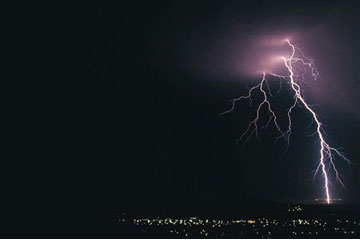 Night photography is more demanding than daylight shooting, but the results can be electrifying.
Photo Digital Vision/Thinkstock

Night photography requires you to understand a few important camera capabilities. Grab your camera and its manual and explore three critical features in manual mode: aperture, shutter speed and the ISO setting.

The aperture is an opening in the lens that controls the amount of light entering the camera, and it works just like the pupil of your eye. Aperture size is indicated by f-stop numbers. A low f-stop number, such as f/2.8, means the aperture is open wide (like your pupils in the dark), and a larger number, like f/22, means the aperture is squeezed to pinpoint size (like your pupils in bright daylight). At night, you generally want to let as much light into the camera as possible, so shooting wide open (at your camera's lowest f-stop) is usually best.

By tweaking the balance between the aperture and shutter speed settings, you can always find a way to achieve the right exposure for night shots. But there's a third, related factor you have to take into account. Your camera has an ISO (International Standards Organization) setting, which lets you control the sensor's sensitivity to light. Some cameras let you ratchet the ISO from as low as 50 to 6400 or higher.

Increasing the ISO setting is very helpful in low light. For example, if you change the ISO from 100 to 200, you're doubling light sensitivity. Practically speaking, this means you can use a shutter speed that's twice as fast to capture the same amount of light. There is a serious trade-off, though: At higher ISO settings, your camera's sensor creates digital noise.

This kind of noise, which you can't hear, refers to variations in brightness in high-ISO images as a result of the electronic circuitry in your camera. It's an unavoidable, undesirable byproduct that makes digital images look grainy, much like high-ISO film created grain in traditional analog cameras.

Lower ISO settings generally produce less grain than exposures shot at very high ISO settings. Nighttime shooting often heightens the effects of noise because the darkness of low-light pictures makes it easier to see. When you edit your pictures, you'll likely want to use noise-reduction software, which helps minimize graininess and makes your images look sharper and clearer.

How to Take Photos of the Night Sky 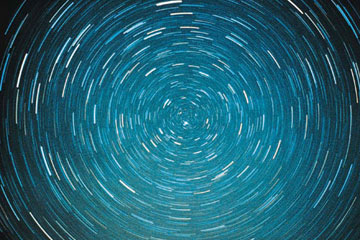 Star trails are a mesmerizing effect you can create with the use of a quality tripod.
Photo Digital Vision/Thinkstock

The night sky is brimming with the brilliant light of distant galaxies and stars. Those pinpricks of light stand out in breathtaking contrast to the deep blackness of night. It's a scene rife with photographic possibilities, and that's where astrophotography comes in.

Astrophotography is the act of photographing astronomical objects and presents a whole range of technical challenges. One of the first is light pollution, the overspill of light from artificial sources like city street lights. To fully appreciate the night sky and capture images of its beauty, you have to escape those city lights and find the darkest place you can. This means getting out of town and into the countryside. You'll want to wait until well after sunset to avoid residual sunlight that lingers in the sky after the sun has recently set. It's also important to have a solid understanding of your digital camera and image-processing software.

Start by playing with your camera's manual features. Place the camera on a tripod and choose the shutter priority mode or bulb mode. These settings are now included on all but the most basic cameras, and either one will let you control shutter speed with precision. Use a shutter release cable so that you don't touch the camera and blur the image. Using a cable release, you can capture single exposures of multiple seconds or even several hours.

After around 15 seconds, stars appear to move across the sky due to the Earth's rotation [source: Heller]. So, if you leave the shutter open long enough, you'll see star trails. Longer exposures create longer trails, filling your composition with blazing pinwheels of starlight.

To capture truly clear images, you'll have to combat the digital noise that plagues all night photos. One way to do this involves taking multiple shots and then using stacking software to combine the images into one. Such software lets you take shorter, less noisy exposures and combines them into a single, crisp image.

Lenses also affect the quality of your images. A decent wide-angle lens will work nicely for skyscapes. But if you have an SLR (single-lens reflex) camera that lets you use different lenses, you may want to invest in a T-ring, which lets you attach your camera to a telescope. This setup allows you to get up close and personal, photographically speaking, with specific stars and planets.

Astrophotography, like all night photography, can be time-consuming and requires patience and experimentation on your part. But no matter which subjects you decide to shoot once darkness shrouds the land, just remember that your imagination (and your camera) can picture what your eyes cannot. With just a flicker of light and some ingenuity, you can become an expert at nighttime photography.

How does a pinhole camera work?
How Thermal Imaging Works
5 High-speed Photography Tips