by Jamie Page Deaton
Prev NEXT
3

Your Flash is Your Friend 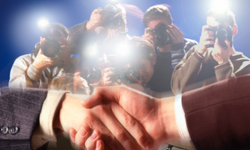 You shouldn't rely on a flash to light your scene for you.
George Doyle/Stockbyte/Thinkstock

If you just can't seem get enough light on your own, a flash is a great way to add some, but you'll need to make sure you're using it correctly. Get familiar with your camera's owner's manual -- it'll have handy tips and tricks specific to your make and model of camera, even if you just use a simple point-and-shoot.

You shouldn't rely on a flash to light your scene for you. Instead, use your flash to fill out the light in a scene, eliminating shadows. For example, if you wanted to take a picture of something by a bright window, you'd likely only get a silhouette, since all the light would be coming in from the window behind your subject. But, by using your flash to fill in the scene, you'll illuminate the details on the front of your subject, too.

Even when using a flash you still have to pay attention to your position and the position of your subjects. Don't use a flash around reflective surfaces like mirrors or windows -- all you'll get is a picture of the flash reflected back at you. And remember: Flashes aren't all-powerful. For the flash to work as it's supposed to, you'll need to put your subject within the range of your flash. Also, if you're taking a group picture with the flash, everyone should be about the same distance from the flash. Otherwise, some people will appear over exposed while others will be under exposed.