Browse the article How the Lytro Camera Works 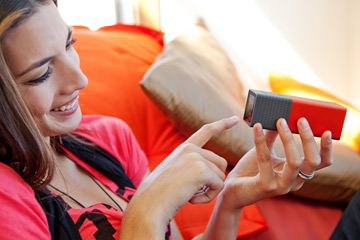 Taking the perfect photograph is part art and part science. In the old days, when film was the only medium you could use, you had to make sure you had the right lens, lighting and type of film for the shot. As digital cameras took center stage, lens choice and lighting remained important. Equally as important was a familiarity with editing software. The right tools can help you adjust the color balance, contrast and other features of the image.

Even cameras for professional photographers have limitations. One of those is the focal point for any given photograph. Imagine you've set up a shot in which a tree branch is in the foreground and a person is posed in the background. You adjust your camera's settings so that the person in the background is in focus. The tree branch in the foreground isn't in focus, creating what you hope is an artistic image. You snap the photo.

Later, as you gaze upon your masterpiece, you have a nagging doubt in your mind. Maybe it would have been better to focus on the tree branch instead of the person posed in the background. Perhaps the ambiguity would have made the picture more intriguing. But you'll never know, because you can't alter the focus on a picture you've already taken.

The Lytro camera addresses this problem. It uses special lenses and sensors to capture all the light fields within the scope of a scene. When you take a picture with a Lytro camera, you're just getting started. With special software,, included when you purchase the camera, you can adjust the focal point of the image after you've already taken it. Switching from a foreground to background focus only takes a touch of your finger or click of a mouse.

How does it work? To really understand it, first we should look at how a traditional camera captures an image.

Focusing on the Problem 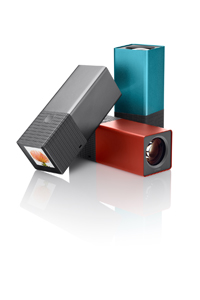 Lytro cameras are available in a variety of colors.
Courtesy Lytro

At the most basic level, a camera makes a record of light. When you photograph a scene, light reflected by the scene hits your camera's lens. The lens bends the light and redirects it to the recording medium. In a film camera, that medium is a strip of chemically treated plastic. In a digital camera, it's an electronic sensor.

Light from the scene bends as it passes through the lens. The light rays all converge on a single point. If you want the subject of your photograph to be in focus, you need that point to be on the surface of your film or on the digital sensor. You can adjust where the rays converge by moving the lens closer to or further from the medium. When you focus a lens in a camera, what's really happening is the lens is moving closer to or further away from the rest of the camera.

The curvature of the lens determines how far away from the lens's surface light will converge to a point. A flat lens won't make light turn in as sharp an angle as a rounded lens will. That's why the convergence point for a flat lens is further from the lens than it would be with a rounded lens. Depending upon what you want to photograph, you'll need the right lens to make sure your subject is in focus.

The standard approach to photography totals up all the light striking an image. There's no one choice with a traditional camera that can capture everything so that you can switch the focus after you've taken the photograph -- what you see in the final image is what you get. But if you could record all the individual light rays so that your image has all the visual information of a scene, you could switch from one focal point to another with the right software.

That's the foundation for the Lytro camera. It captures not just the total amount of light within a scene, but the actual light fields. 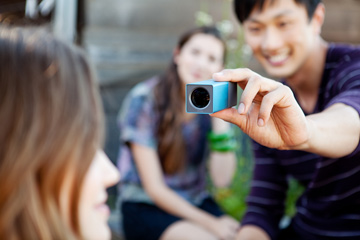 Taking a photo with the Lytro camera involves pushing a button. You focus later.
Courtesy Lytro

When we look at a lit object, our eyes detect the light bouncing back from that object. That light travels in all directions -- if the object is transparent, the light continues through it as well. If you were able to isolate a single point in space within this lit scene, you would discover rays of light crossing through, traveling in all directions.

A light field describes this phenomenon. You can think of a ray of light as something that has five dimensions. Three of those dimensions are the spatial dimensions we're all familiar with -- what roughly translates to height, length and depth, or the x, y and z axes. The other two dimensions refer to the flow of light along the ray.

The geometric distribution of light is what we call a plenoptic function. The word plenoptic comes from the Latin word plenus meaning full or complete. Optics refer to the behavior of light. To capture the complete light from a scene, we would need a plenoptic camera.

A literal plenoptic camera is just a thought exercise. Opaque physical objects block light -- they cause occlusion. To capture a light field, the camera -- and photographer -- would have to inhabit every perspective around a subject simultaneously without blocking light. We haven't figured out how to position a camera to capture every point of view around a subject or prevent occlusion. But the Lytro camera does simulate some plenoptic functions.

The device has a few things in common with your average digital camera. It has a lens and aperture through which light passes. It also has a sensor that detects light. But between the two is an array of microlenses. These lenses are much smaller than the Lytro's main lens -- a prototype plenoptic camera that was the predecessor to the Lytro had microlenses that were 280 times smaller than the main lens [source: Ng].

Once you've captured an image, it's time to crunch some numbers.

Imagine you have a long table filled with objects. You stand at one end of the table and focus on the nearest group of objects and take a photo. With a normal digital camera, you would end up with a photo in which the closest objects are in focus. The farther away the other objects are, the more fuzzy and indistinct they'll appear in the picture.

Initially, a Lytro photo can look that way too. But if you indicate that you would like a different area of the image to be in focus -- you really want to see those cool toys you put on the other end of the table perhaps -- the focal point switches.

The Lytro's sensor can generate different images based on the light field captured within the camera. While you're limited by a physical camera's focus settings when you take a picture, the Lytro gives you choices. That's because you can change the focal depth of a Lytro image after you've already taken the photo.

As you focus a physical camera, you move the lens and aperture closer to or further from the sensor. A Lytro image -- the proprietary image file is called a Light Field Picture or LFP file -- contains information about the light field for that picture. Essentially, the software creates a virtual lens and sensor, simulating what would happen if you were to have physically changed the focus on a traditional camera. The virtual lens moves closer to or further away from the virtual sensor.

A complex collection of algorithms do the work. The light you capture with the camera serves as information. The algorithms are a set of directions for the Lytro software to follow. The software simulates what a physical camera would have done and generates the image with the appropriate focal point. Without the information from the light field, this wouldn't be possible -- the Lytro wouldn't have the information needed to switch focus.

The company offers a software product called Lytro Desktop that lets you store and manipulate Lytro photos on your computer. Eventually, the camera may also allow you to take photos with an extended depth of field. That means you may be able to take a photo with objects in the foreground and background and keep everything in focus at the same time. Extended depth-of-field algorithms essentially piece together a photo by taking the sharpest parts of every potential picture you would get from a Lytro camera shot. It's almost like taking a series of photos with different focal points, cutting out all the bits that are actually in focus, and then pasting it all together.

The Lytro company calls LFP images "living pictures." That's because you can share these images through a special platform called the Lytro Web. The platform supports the software that lets you switch the focus on an image. By sharing your photos on this platform, you can let other people explore your photos and change the focus as frequently as they like.

You can also choose to keep your files stored locally on your computer, viewing them with the Lytro Desktop software. This software also gives you the ability to switch the focus on any image snapped with the Lytro camera any time you like. While the LFP files contain all the information about the light field of the images you've snapped, the software contains the set of instructions required to switch out the focal points.

One of the downsides to the light field photography approach is that image files tend to be large. They're big because capturing all the information within a light field takes up a lot of data space. A typical LFP file is around 16 megabytes. By contrast, a typical JPEG image on the Web may only be 30 kilobytes or smaller.

Another downside is that you can't share an LFP image outside of the Lytro Web platform. If you want to share an LFP, you first must upload it to Lytro Web. Then you can send the link to whomever you like.

You can convert LFP files into JPEG files but there's a catch. A JPEG can't support the living picture format -- in other words, you can't switch the focus. To export an LFP as a JPEG, first you have to choose which focal point you want in your image. As a JPEG, your picture will be unchangeable -- it's just a normal digital photo.

Will light-field photography eliminate the need to develop photography skills like composition and focus? In the short term, it seems like the Lytro's limitations will prevent it from eliminating the hard work and artistic skill serious photographers develop over years of practice. But perhaps in the future these cameras will make it easy to just point, shoot and focus on whatever you like later.

Here's an example of a Living Picture. This image was captured by Lytro community member hanlin. Clicking on the Eiffel Tower in the background brings it into focus. Clicking on the model in the foreground switches the focus back again.

When I first heard about the Lytro camera, I was astonished. I'm used to photographs being relatively static. I'm familiar with making minor edits and tweaking settings in the digital photography world but there are some hard limits you run up against that I didn't think you could get around. The Lytro camera opened up my eyes to other possibilities. I even got to play with one in the spring of 2012 at a press event. Sadly, they made me give it back before I could run outside, taking photos in a fiendish photographic fit.