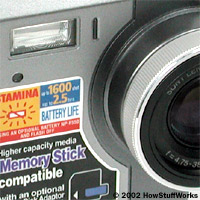 ­If you've read How Cameras Work, you know that it takes a lot of light to expose a vivid image onto film. For most indoor photography, where there is relatively little ambient light, you either need to expose the film for a longer period of time or momentarily increase the light level to get a clear picture. Increasing the exposure time doesn't work well for most subjects, because any quick motion, including the movement of the camera itself, makes for a blurry picture.

Electronic flashes are a simple, cheap solution to this inherent problem in photography. Their sole purpose is to emit a short burst of bright light when you release the shutter. This illuminates the room for the fraction of a second the film is exposed.

In this article, we'll find out exactly how these devices carry out this important task. As we'll see, a standard camera flash is a great demonstration of how basic electronic components can work together in a simple circuit.

A typical camera flash tube, removed from its housing, looks like a miniature neon light.

A basic camera flash system, like you would find in a point-and-shoot camera, has three major parts.

The two components on the ends of the system are very simple. When you hook up a battery's two terminals to a circuit, the battery forces electrons to flow through the circuit from one terminal to the other. The moving electrons, or current, provides energy to the various things connected to the circuit (see How Batteries Work for more information).

The discharge tube is a lot like a neon light or fluorescent lamp. It consists of a tube filled with xenon gas, with electrodes on either end and a metal trigger plate at the middle of the tube.

The basic idea is to conduct electrical current -- to move free electrons -- through the gas in the tube, from one electrode to the other. As the free electrons move, they energize xenon atoms, causing the atoms to emit visible light photons (see How Light Works for details on how atoms generate photons).

You can't do this with the gas in its normal state, because it has very few free electrons -- that is, nearly all the electrons are bonded to atoms, so there are almost no charged particles in the gas. To make the gas conductive, you have to introduce free electrons into the mix.

Another camera flash tube design: In this curved tube, the trigger plate is attached directly to the glass on the tube.

This is the metal trigger plate's job. If you briefly apply a high positive voltage (electromotive force) to this plate, it will exert a strong attraction on the negatively charged electrons in the atoms. If this attraction is strong enough, it will pull the electrons free from the atoms. The process of removing an atom's electrons is called ionization.

To accomplish this, you need relatively high voltage (electrical "pressure"). It takes a couple hundred volts to move electrons between the two electrodes, and you need a few thousand volts to introduce enough free electrons to make the gas conductive.

A typical camera battery only offers 1.5 volts, so the flash circuit needs to boost the voltage substantially. In the next section, we'll find out how it does this.

In the last section, we saw that a flash circuit needs to turn a battery's low voltage into a high voltage in order to light up a xenon tube. There are dozens of ways to arrange this sort of step-up circuit, but most configurations contain the same basic elements. All of these components are explained in other HowStuffWorks articles:

The diagram below shows how all of these elements come together in a basic flash circuit.

Taken in its entirety, this diagram may seem a little overwhelming, but if we break it down into its component parts, it isn't that complicated.

If you've read How Electromagnets Work, you know that passing current through a coiled length of wire will generate a magnetic field. If you've read How Inductors Work, you know that a fluctuating magnetic field, generated by fluctuating electric current, will cause a voltage change in a conductor. The basic idea of a transformer is to run current through one inductor (the primary coil) to magnetize another conductor (the secondary coil), causing a change in voltage in the second coil.

To boost voltage in this way, you need a fluctuating current, like the AC current (alternating current) in your house. But a battery puts out constant DC current (direct current), which does not fluctuate. The inductor's magnetic field only changes when DC current initially passes through it. In the next section, we'll find out how the flash circuit handles this problem.

Professional photographers often set up flashes all around a subject to achieve better lighting effects. In this arrangement, one master flash may be triggered by the camera shutter, while other flashes are triggered by the master. Some slave flash designs use the master flash's light itself as a trigger. The slave flash has a small light sensor that triggers the flash circuit when it detects a sudden pulse of light.

In the last section, we saw that transformers need fluctuating current to work properly. The flash circuit provides this fluctuation by continually interrupting the DC current flow -- it passes rapid, short pulses of DC current to continually fluctuate the magnetic field.

The circuit does this with a simple oscillator. The oscillator's main elements are the primary and secondary coils of the transformer, another inductor (the feedback coil), and a transistor, which acts as an electrically controlled switch.

­ The high-voltage current then passes through a diode, which acts as a rectifier -- it only lets current flow one way, so it changes the fluctuating current from the transformer back into steady direct current.

The flash circuit stores this high-voltage charge in a large capacitor. Like a battery, the capacitor holds the charge until it's hooked up to a closed circuit.

The capacitor is connected to the two electrodes on the flash tube at all times, but unless the xenon gas is ionized, the tube can't conduct the current, so the capacitor can't discharge.

The capacitor circuit is also connected to a smaller gas discharge tube by way of a resistor. When the voltage in the capacitor is high enough, current can flow through the resistor to light up the small tube. This acts as an indicator light, telling you when the flash is ready to go.­

The capacitor in a typical camera flash circuit can store a lot of juice. We charged this one up and then discharged it by connecting the two terminals. Check out this short video to see what happened. (Kids, don't try this at home!)

The flash trigge­r is wired to the shutter mechanism. When you take a picture, the trigger closes briefly, connecting the capacitor to a second transformer. This transformer boosts the 200-volt current from the capacitor up to between 1,000 and 4,000 volts, and passes the high-voltage current onto the metal plate next to the flash tube. The momentary high voltage on the metal plate provides the necessary energy to ionize the xenon gas, making the gas conductive. The flash lights up in synch with the shutter opening.

Different electronic flashes may have more complex circuitry than this, but most work in the same basic way. It's simply a matter of boosting battery voltage to trigger a small gas discharge lamp.

For much more information on camera flashes, including flashes that "read" the subject in front of them, check out the links on the next page.