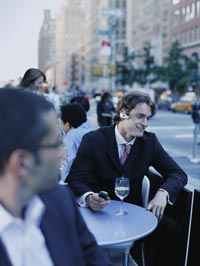 By switching a Bluetooth device to the discoverable setting, Bluetooth users can find and contact one another.
DreamPictures/Getty Images

Bluetooth technology operates by using low-power radio waves, communicating on a frequency of 2.45 gigahertz. This special frequency is also known as the ISM band, an open, unlicensed band set aside for industrial, scientific and medical devices. When a number of Bluetooth devices are switched on in the same area, they all share the same ISM band and can locate and communicate with each other, much like a pair of walkie talkies tuned to the same frequency are able to link up.

Bluetooth technology users take advantage of this ability to network with other phones and can send text messages or electronic business cards to each other. To send information to another party, the user creates a personal contact name in his or her phone's address book -- the name can be anything from the sender's actual name to a clever nickname.

Bluejackers have devised a simple technique to surprise their victims: Instead of creating a legitimate name in the address book, the bluejacker's message takes the place of the name. The prank essentially erases the "from" part of the equation, allowing a user to send any sort of comment he wishes without indentifying himself.

For instance, if you're sitting in a coffee shop and notice a fellow Bluetooth user sitting down to enjoy a cup of iced coffee, you could set up a contact under the name "Is your coffee cold enough?" After choosing to send the text via Bluetooth, the phone will search for other enabled Bluetooth devices; selecting one will send the unsolicited message to that device. A bluejacker's crowning moment comes, of course, when the victim receives the message and expresses a mild mix of confusion and fear that he's under surveillance.

Bluejacking is imprecise, however. Searching for other Bluetooth-enabled hardware might turn up a list of devices labeled with a series of numbers and letters. Unless the bluejacker's target has chosen to publicly identify his or her phone, or it's the only Bluetooth phone in the area, the bluejacker may have a hard time messaging his or her target on the first try.

After bluejacking turned into a small tech subculture in 2003, several Web sites emerged, offering how-to's and forums for trading stories. But there's even a bluejacking code of ethics, according to bluejackQ.com. Bluejackers should refrain, for example, from sending insulting or threatening messages to others, and if no interest is shown in communication after two messages, the bluejacker should cease activity in order to avoid annoying anyone. The point of bluejacking, according to its proponents, is to have fun, not cause complete anarchy.

For lots more serious and not-so-serious information on Bluetooth technology, see the links below.