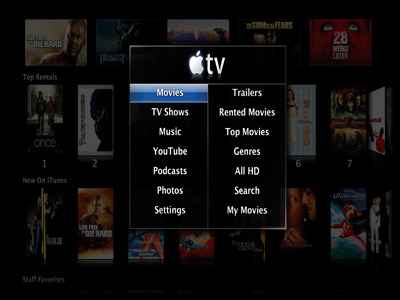 Apple TV features a graphical user interface based on a version of OS X 10 that Apple tailored specifically for Apple TV's capabilities. You use Apple TV's remote control to click through a series of menus and submenus displayed on your TV screen. These menus let you choose from audio and video content stored on the Apple TV itself or on any iTunes collections on your networked computers.

Soon after Steve Jobs introduced Apple TV, its software quickly became a target for critics who wanted more features and flexibility. For example, the Apple TV can't play Microsoft's copy-protected .WMA (Windows Media Audio) files from a Windows PC. Apple TV also doesn't let you find content from random Internet sources the way you can via a Web browser, instead forcing you to use YouTube, MobileMe or Flickr.

In February 2008, Apple addressed the complaints with a major software update called Take 2. This version and its subsequent releases let you substitute just about any third-party universal remote for the Apple TV remote, enabled volume control for audio playback, permitted a new range of playlist functions and added other capabilities. Most importantly, it enabled features that recent Apple TV buyers take for granted, such as the ability to rent movies from iTunes, purchase TV shows, view photos from MobileMe and Flickr galleries and play iTunes audio through the Apple TV and your stereo using AirTunes.

The included six-button remote lets you play and rewind or fast-forward through any video, or skip audio tracks, but remember that you don't have to use the remote that Apple gives you. Many universal remotes will work as well. For example, you can use a third-party remote to control your Apple TV, DVD player and television. Alternately, you can install the Remote application from iTunes to your iPhone or iPod Touch, both of which have keyboards that will come in handy for specific tasks, like typing keywords into the YouTube search engine.