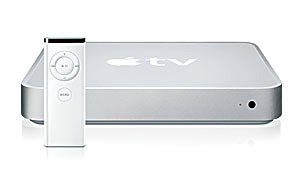 Apple TV's small, silvery case certainly doesn't look anything like a desktop computer, but its hardware list is very similar to a computer's. It features an Intel processor, 40GB or 160GB hard drive, 256MB of RAM, connectivity for both wired and wireless Ethernet networks, and an NVIDIA GeForce Go 7300 graphics card. HDMI and component jacks connect the device to your HDTV, and there's a USB port that's intended for technical service purposes. If your older standard definition TV has component jacks you can use the Apple TV, but unless it supports widescreen input the picture will be stretched and probably not much fun to watch. Although Apple could've provided letterbox formatting for standard definition TV, in keeping with company trends that focus on up and coming technologies, it opted to move on to the widescreen formats that will eventually dominate the TV marketplace.

Apple designed the Apple TV for its usability. Connect your TV to the Apple TV and it automatically detects your wireless network. Then you can synchronize the device to one computer's iTunes library and still access iTunes libraries on up to five other computers around your home. Hit the couch, grab your Apple TV remote control, and you can play music, watch popular TV programs, start a movie or stream content from YouTube, Flickr, or MobileMe.

You don't always need a network or even an Internet connection to use an Apple TV with your television, just as you don't need a computer to hear music on your iPod. You can simply synchronize it with the iTunes library on your computer and then play back files stored on your Apple TV's hard drive. The smaller 40GB version stores about 50 hours worth of video or 9,000 songs; the 160GB drive's capacity stores around 200 hours of video or 36,000 songs.

You can also use your Internet connection to browse Apple content online. Through the iTunes store, you can rent a newly released standard definition or HD movie with surround sound and begin watching in minutes. HD movies contain more data and take longer to transmit, so if you have a sluggish Internet connection you may have to wait longer for the movie to load. Apple indicates that wait times to start an HD-quality film range from less than 60 seconds (at 6Mbps [megabits per second]) or two hours if your speeds are closer to 2Mbps.

You have 30 days to start watching the movie and once you begin, you have to finish it within 24 hours. New releases, of course, cost a bit more than older flicks. You can also buy music or purchase TV shows a day after they air from the iTunes store.