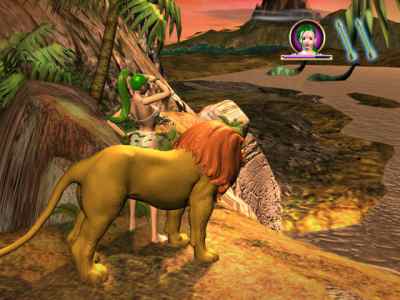 Only the portions of the objects in view are rendered.

After the basics are in place, the production team begins to refine the game. Part of this refinement involves optimizing the game code, polygon count and logic, including adjusting the clipping planes and culling. The polygon count (number of polygons on screen at the same time) is a major factor in the smooth rendering and quick response of a game.

Clipping planes determine whether or not polygons in the field of view will be rendered. This depends on how close to the camera the polygons are. Typically, the near clipping plane will not render polygons that are close enough to intersect the plane of the camera. This keeps your viewpoint in the game from intersecting another object and thus blanking out. And the far clipping plane is normally set at the point where the screen resolution causes the details to become impossible to see. There is no need to render objects that you cannot see.

This leads to another area of optimization. While the far clipping plane does not render entire objects that are too far away, culling means that the video game system does not render the parts of objects that are outside your viewing area. For example, when you look at a building, you normally only see one or two sides of the building. In a game, you can increase performance by not rendering the other sides of the building until you move around to the point that you can see them. And as you move, the game can stop rendering the things you can no longer see.

One of the refinements that John Salera said 3DO wanted to make to Portal Runner was to determine where they could eliminate polygons through culling in order to increase the polygon count for Vikki, from 1,500 polygons to 3,000. They want to do this without increasing the overall number of polygons onscreen. By increasing the polygon count of a specific object (like Vikki), the object can be made to look smoother and more realistic.

Periodically during the development of the game, 3DO sends builds (partially complete versions) of the game to the game console maker. This is done to keep the console maker informed about how the game is developing and to ensure that there are no surprises that the manufacturer might take issue with.

As the game nears completion, it enters the post-production phase. This phase has several parts:

Sometime during this period, the game is sent to the Entertainment Software Rating Board (ESRB) to be given a rating. If the game is released before a final rating is set, it will have an RP (Rating Pending) in the rating box.