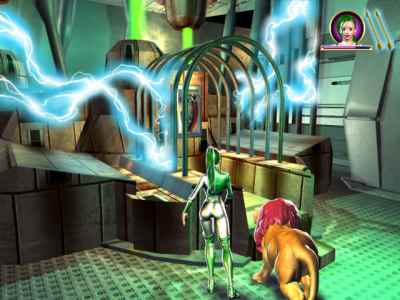 A good example of the models and textures in Portal Runner FMVs.

Once the storyboards and overall game level designs are complete, the game enters the production phase. The preproduction team expands as needed to include additional artists, programmers and designers.

3DO's artists began developing the 3D models that will make up the worlds of Portal Runner using a software application called 3D Studio Max. Richly detailed texture maps were created for each object. While the game developers at 3DO created the actual game environment using these models and textures, another division of the company, PlayWorks, used the same models to develop the animated full-motion video (FMV) sequences for the game.

Meanwhile, the programmers wrote custom code in C programming language that provided the framework for the game objects. A lot of code was pulled from the company's library, a bank of predeveloped code that could be repurposed for different games.

Some of the code for a game involves the 3D engine, an application that generates all the polygons, shadows and textures that you see. Another piece of code is the artificial intelligence component. This is the logic of any game. It establishes the physics of the game, detects interaction and collisions of objects and controls movement of the characters. Development of the game code is done using a special development version of the particular game system that has increased memory, an SVGA monitor connection, a network connection and a hard drive.

All the bits and pieces -- objects, textures and code -- are fed into a special utility called a tool chain that combines the pieces into one big piece of code. The tool chain makes code that is executable on a specific platform, which basically means that the game code will actually run on the game system that it was designed for. To test the game, Portal Runner director John Salera used another specialized game console built for debugging games.