Pong Was the First Video Game 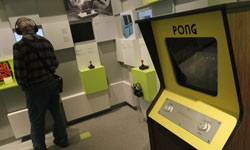 History was made in Sunnyvale, Calif.'s Andy Capp's Tavern on Nov. 29, 1972 [source: BartonandLoguidice]. Ted Dabney and Nolan Bushnell -- two computer programmers who had just founded Atari -- had set up and unveiled a new arcade game by the name of "Pong" that night. The game's debut represented the birth of the video gaming industry, which would reach global revenue of $38 billion just 34 years later [source: ABIResearch].

Actually, another arcade game had been released a full year prior to "Pong"'s debut at Andy Capp's Tavern. Contrary to popular belief, it turns out that the relatively little-known "Computer Space" holds the title of world's first arcade video game [source: Barton and Loguidice]. It was based on a computer game called "Spacewar!" that was a bit too difficult for gamers since, at that time, every gamer was a novice. "Pong" was slightly more everyone's speed; its popularity blew the doors off of "Computer Space" and led to the myth that it was the first video game.