'Tomb Raider' Has a Nude Code 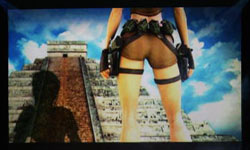 Lara Croft has often been shown in alluring poses during "Tomb Raider" cut scenes, but the code rumored to remove her clothes is just that -- a rumor.
Gareth Cattermole/Getty Images

In 1996, "Tomb Raider" was a revelation. It was the atmospheric, adventure-laden Indiana Jones-style video game we'd always wanted. There were ancient ruins, mythological treasures and dinosaurs. Lara Croft was gaming's new icon, but that was due to her appearance as much as her game. The buxom adventurer was a strong, independent character, but her design was straight out of male fantasy. Naturally, rumors quickly started flying around claiming there was a nude code in "Tomb Raider" that would strip Lara down to her birthday suit.

The code never existed, but that didn't stop gamers from trying. Fake codes and secrets made the rounds on the Internet (in its early days in 1997) and throughout gaming culture. "Tomb Raider" actually does have codes that gamers can enter for other purposes, but nothing that gets Lara Croft naked [source: CheatCC]. Despite being a myth, the "Tomb Raider" nude code is notorious to this day -- Lara Croft's status as a gaming sex symbol ensured that.

And in the end, mischievous gamers got the last laugh. While there's no nudity built into any of the "Tomb Raider" games, game modders eventually created nude character models for Lara that could be loaded into the PC versions of the game.