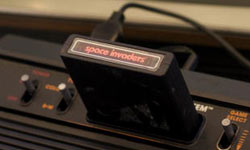 "Space Invaders" was an incredibly popular Atari title, but did its less-popular cousins end up hitting the landfill en masse?
David Greedy/Getty Images

Sometimes what sounds like a myth is actually the truth -- sort of. This is the case with the longstanding rumor that there are millions of Atari game cartridges buried in the New Mexico desert.

In September 1983, 14 trucks containing somewhere in the neighborhood of 10 million unwanted -- hated, even -- Atari game cartridges showed up at the Alamogordo landfill [source: Snopes]. They dumped their cargo there and went along their way, leaving behind evidence of the birth of one of the earliest video game rumors.

The reason for the mass dumping is a matter of public record; Atari's fourth-quarter earnings report for 1982, to be precise. The company had a year that was far worse than expected, largely because it had staked so much on two pivotal releases: its home console version of "Pac-Man" and a game based on the blockbuster film, "E.T." Both titles hit so far below company and public expectations that around 5 million copies of each were returned to the company. Stuck with millions of the games, Atari opted to bury them.

Unfortunately, nostalgic video game hunters who visit the landfill in search of a souvenir will be sorely disappointed. The company had the landfill owners crush the cartridges with a steamroller, and the whole pile was paved over with concrete [source: Snopes].