Do you suffer from 'ringxiety'?

Ringxiety and its Psycho-social Consequences 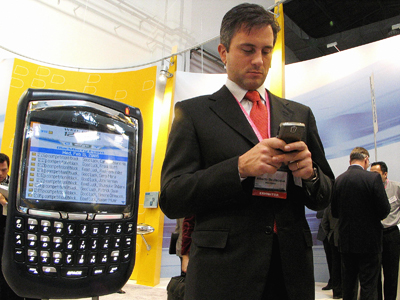 If cell phones and BlackBerries have become so popular that some people imagine they are having incoming calls, is it possible the users have become too dependent on these devices? What other psychological effects do these devices have on us?

HowStuffWorks is not the first to ask this question. In his study on ringxiety, David Laramie found a link between increased cell phone use and phantom ring/vibration experiences. He found that two-thirds of the people he surveyed for the study said they'd experienced ringxiety. Those who experienced the phenomenon the most -- 67 percent of the survey population -- also used the phone the most. They used up more minutes, had larger phone bills, tended to be younger and also sent more text messages [source: Newswise].

The fact that the people who spent more time using their phone experienced ringxiety more often comes as little surprise. But there is another aspect of Laramie's study that may be more revealing. He found that people who preferred to text others rather than call tended to be more lonely and socially anxious.

Does that mean the way a person uses his phone can predict his personality type? Possibly. Another study shows that phones may directly affect a person's personality. Specifically, wireless devices can make us less happy.

In 2005, psychologist Noelle Chesley conducted a study of 1,367 men and women who work, have families and use cell phones. She found an increase in stress and a decrease in family satisfaction among both men and women who use cell phones. Chesley believes this is due to what she and other researchers call a blurring of the traditional lines between work and family life.

This blurring occurs when role boundary permeability takes place. Under this condition, a person's role in one part of their life merges with another role. For example, a woman might get a call at work by one of her kids looking for the TV remote at home. In this case, the woman's role of mother has infiltrated her separate role as employee.

The spillover from family life into work is much more likely to happen for women than for men, according to Chesley's study. But men and women alike suffer similar amounts of spillover from work into family life, and the study points to cell phones as the reason for work intruding into family life. Chesley's findings show that while people with cell phones suffer from increased stress and lowered family satisfaction, e-mail -- a more "passive" form of communication -- does not produce the same results. This suggests that cell phones are more intrusive than other forms of communication, and our happiness suffers as a result of this intrusion.

So the next time you hear your phone ringing but no one's calling, or you feel your phone vibrate in your pocket when it's really in another room, step back for a moment. Perhaps it's time to ponder the possibility that you should take a vacation -- one where you leave your cell phone at home.

For more information on cell phones, anxiety and related articles, read the next page.