How Records Are Played 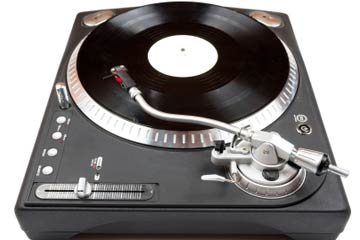 The vibrations from the record's grooves travel up by the needle, through the cartridge and the arm to the amplifier, where they are magnified into sound waves.
©iStockphoto.com/Iñaki Antoñana Plaza

For almost a century, the record player was the most common way to listen to recorded music, speeches, languages and lessons. The design has been refined over the years, but the concept changed little, and the basic parts have remained the same.

The turntable is the circular plate on which the record sits. A rod positioned in the center holds the record (which has a hole in its center) in place. The metal turntable is covered in rubber or plastic, which protects the record from being scratched. The turntable rotates or spins with the help of either a belt drive or direct drive system.

The stylus, or needle, is the smallest and perhaps the most important component of the record player. It is made from a diamond or other hard material, shaped like a cone and suspended by a flexible strip of metal. The pointed end is the only piece that touches the top of the record and it rides around the spiraling grooves of the disk, picking up the vibrations which are ultimately turned back into sound.

The stylus sits at one end of the tone arm, which is mounted to the side of the turntable and sits parallel to the record. With the needle or stylus placed in the outermost groove of the record, the tone arm follows the groove as it spirals inward, traveling across the record in an arc as the record spins beneath it. As this happens, the vibrations travel along a flexible metal strip and wires housed in the tone arm to the cartridge in the end of the tone arm. The cartridge receives the vibrations, which are converted to electrical signals through a coil in a magnetic field. The electric signals are carried along wires to the amplifier which enhances the power of the signal. Finally, the signals are converted back to sounds that come out through the speakers.

Initially, recorded sounds were mainly monophonic, meaning all of the sound signals are combined and come through one speaker or channel. The introduction of stereophonic sound systems in 1958 allowed for a richer, more lifelike sound as two sets of sound waves were recorded. When played, the vibrations travel simultaneously along two different channels and are converted and dispersed through two different speakers.

Record players became more common as recorded music grew in popularity, but not everyone jumped on the bandwagon. Read on to discover which famous band leader didn't like the idea of recorded music.