Evolution of the Record Player 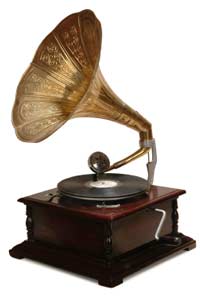 An old gramophone with a horn and flat disc like this is similar to Emile Berliner's design.
©iStockphoto.com/Faruk Tasdemir

Although Edison temporarily stopped work on his phonograph, interest in recording and playing sound was not abandoned. Ten years after its invention, in 1887, a German inventor in the U.S. named Emile Berliner built on the ideas of Edison's design. Instead of a cylinder with the sound etched in tinfoil or wax, he developed a device that rotated a hard rubber (and later, shellac) disc on a flat plate by the turn of a crank.

But unlike its predecessor, the phonograph, Berliner's machine, the gramophone, could only play recordings. So Berliner started the Gramophone Company, which manufactured not only the machines, but the records played on them. What was lost in the ability to both record and play back sound in one machine resulted in a new system whereby mass-produced recordings could be played and shared repeatedly.

Berliner's company merged with that of inventor Eldridge Johnson to become the Victor Talking Machine Company in 1901. It manufactured and advertised both gramophones and records. Johnson refined the design of the gramophone, which until that time had been dominated by a large horn to amplify the sound. In order to fit more comfortably in a home, the horn was tilted down and the entire device placed in a cabinet. This new design, introduced in 1906, was called the Victrola. Meanwhile, the company also manufactured discs recorded by famous opera singers and musicians, giving the public unprecedented access to music [source: Shoenherr, Morton: Phonograph].

Over time, the design of the gramophone and the recording process were continuously changing, yet the core elements of the needle in a groove remained the same. By the mid-20th century, most households had what was then commonly known as a record player and most recently called a turntable. Its mass popularity lasted until about the mid-1980s when cassette tape recordings overtook records.

We're on our way to finding out what exactly goes on during a record player's playback, but first, we need to understand the basics of how a vinyl record is created.