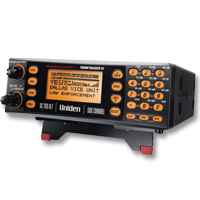 The air around you is bursting with radio waves. You know that you can flip on the AM/FM radio in your car and receive dozens of stations. You can flip on a CB radio and receive 40 more. You can flip on a TV and receive numerous broadcast channels. Cell phones can send and receive hundreds of frequencies. And this is just the tip of the radio spectrum iceberg. Literally tens of thousands of other radio broadcasts and conversations are zipping past you as you read this article -- police officers, firefighters, ambulance drivers, paramedics, sanitation workers, space shuttle astronauts, race car drivers, and even babies with their monitors are transmitting radio waves all around you at this very moment!

To tap into this ocean of electromagnetic dialogue and hear what all of these people are talking about, all you need is a scanner. A scanner is basically a radio receiver capable of receiving multiple signals. Generally, scanners pick up signals in the VHF to UHF range (see How the Radio Spectrum Works for details on these frequency bands).

Radio scanners are very portable and affordable. In this article, we will look at the basics of scanner operation, examine radio scanning as a hobby, and show you how to get started listening to public airwaves you may not have known existed!

In scan mode, the receiver constantly changes frequencies in a set order looking for a frequency that has someone transmitting. Lights or panel-mounted displays show what channel or frequency is in use as the scanner stops on a given frequency. The frequencies can be preprogrammed on some models or manually set on practically all models.

In manual scan mode, the user taps a button or turns a dial to manually step through preprogrammed frequencies one frequency at a time.

In search mode, the receiver is set to search between two sets of frequencies within a given band. This mode is useful when a user does not know a frequency, but wants to know what frequencies are active in a given area. If the frequency the scanner stops at during a search is interesting, the user can store that frequency in the radio scanner and use it in scan mode.

Radio scanners can be either portable, with rechargeable battery packs, or desktop, like a regular radio. Scanners are gaining popularity with consumers. With the huge popularity of NASCAR racing, many people now use scanners at auto racing events to eavesdrop on the crew-driver communications at races. At a typical race, there are hundreds of frequencies in use. Each team has two or three frequencies, while race control, the sanctioning organization, the medical, fire and track crews and many others each have assigned frequencies during the race.

Some of the recently released scanners are capable of tracking municipalities and police frequencies in the 800-megahertz (MHz) range. This is known as trunk tracking of computer-controlled trunked radio networks.

Higher-end scanners can be controlled by the serial port of a personal computer using special software. This helps the user with the logging of stations as well as with duplicating the scanner controls within the software application.

Many models receive the NOAA weather radio broadcasts. This can be a very useful feature during pending tornadoes or hurricanes.

The controls on a radio scanner can vary, but practically all of them have:

Radio scanners usually come with small whip antennas as well as an external antenna connector. An outside antenna or attic antenna enables you to hear more transmissions at a greater distance.

Some law enforcement agencies also use audio inversion and other scrambling technologies to prevent the reception of sensitive communications. You will not be able to decipher these conversations.

Even so, there is an unbelievable number of radio services that use frequencies most scanners can hear.

Until you buy your own scanner, you can try out scanning frequencies on Web-controlled receivers.

You might hear the police conversing in the 10-codes.

Getting Started With Your Scanner

Frequency lists are easy to obtain, often via the Internet. You can find a free frequency list for your area at this Web site.

If you buy a portable scanner, park near an airport sometime and search the VHF AM aviation-band range, from approximately 118 MHz to 135.975 MHz, to hear all the activity that is going on. In some areas, programming 123.45 MHz into your scanner will let you hear some pilot-to-pilot communications.

Many desktop models work on a 12-volt power supply, so a cigarette-lighter adapter will allow you to take one on a trip.

Community Service with a Scanner

Scanners have helped law enforcement track down criminals. For instance:

Often, family members of those in fire protection, emergency medical services and law enforcement have a scanner so they can hear what is going on.

Scanner users sometimes receive negative publicity when they use information that they have heard for private personal gain. Be sure to obey the scanner laws when scanning.

Join a neighborhood watch team or a crime watch team and use the information you hear for awareness and safety.

Listening in via the Internet

If you wish to get a taste of radio scanning, and have a sound card in your PC, try the various radio scanner live broadcasts for police, fire, rail and aviation.

Reception over the Internet may be erratic when there is network congestion, but this is an inexpensive way to try out radio scanning via your PC and the Internet.

Once you buy a scanner, read the manual from cover to cover so you know all of the capabilities. Ask questions in one of the many scanner newsgroups on the Internet -- there are active USENET newsgroups that many scanner hobbyists visit. You can use rec.radio.scanner or alt.radio.scanner, easily accessed through your Web browser. Check out some of the scanning resources on the Internet, then try these tips:

For lots more information on radio scanners and related topics, check out the links on the next page!