Browse the article How OLEDs Work 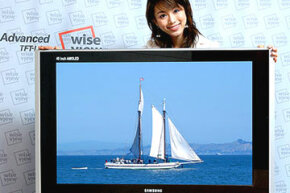 Imagine having a high-definition TV that is 80 inches wide and less than a quarter-inch thick, consumes less power than most TVs on the market today and can be rolled up when you're not using it. What if you could have a "heads up" display in your car? How about a display monitor built into your clothing? These devices may be possible in the near future with the help of a technology called organic light-emitting diodes (OLEDs).

­In this article, you will learn how­ OLED technology works, what types of OLEDs are possible, how OLEDs compare to other lighting techn­ologies and what problems OLEDs need to overcome.

OLED components include organic layers that are made of organic molecules or polymers. Learn about some of the different OLED components.
CONFIRM CREDIT BEFORE USING THIS IMAGE

Like an LED, an OLED is a solid-state semiconductor device that is 100 to 500 nanometers thick or about 200 times smaller than a human hair. OLEDs can have either two layers or three layers of organic material; in the latter design, the third layer helps transport electrons from the cathode to the emissive layer. In this article, we'll be focusing on the two-layer design.

An OLED consists of the following parts:

Anode (transparent) - The anode removes electrons (adds electron "holes") when a current flows through the device.

Organic layers - These layers are made of organic molecules or polymers.

Conducting layer - This layer is made of organic plastic molecules that transport "holes" from the anode. One conducting polymer used in OLEDs is polyaniline.

Emissive layer - This layer is made of organic plastic molecules (different ones from the conducting layer) that transport electrons from the cathode; this is where light is made. One polymer used in the emissive layer is polyfluorene.

Cathode (may or may not be transparent depending on the type of OLED) - The cathode injects electrons when a current flows through the device.

The biggest part of manufacturing OLEDs is applying the organic layers to the substrate. This can be done in three ways:

OLEDs emit light in a similar manner to LEDs, through a process called electrophosphorescence.

The process is as follows:

The types of molecules used by Kodak scientists in 1987 in the first OLEDs were small organic molecules. Although small molecules emitted bright light, scientists had to deposit them onto the substrates in a vacuum (an expensive manufacturing process called vacuum deposition -- see previous section).

Since 1990, researchers have been using large polymer molecules to emit light. Polymers can be made less expensively and in large sheets, so they are more suitable for large-screen displays.

There are several types of OLEDs:

Each type has different uses. In the following sections, we'll discuss each type of OLED. Let's start with passive-matrix and active-matrix OLEDs.

PMOLEDs have strips of cathode, organic layers and strips of anode. The anode strips are arranged perpendicular to the cathode strips. The intersections of the cathode and anode make up the pixels where light is emitted. External circuitry applies current to selected strips of anode and cathode, determining which pixels get turned on and which pixels remain off. Again, the brightness of each pixel is proportional to the amount of applied current.

PMOLEDs are easy to make, but they consume more power than other types of OLED, mainly due to the power needed for the external circuitry. PMOLEDs are most efficient for text and icons and are best suited for small screens (2- to 3-inch diagonal) such as those you find in cell phones, PDAs and MP3 players. Even with the external circuitry, passive-matrix OLEDs consume less battery power than the LCDs that currently power these devices.

AMOLEDs have full layers of cathode, organic molecules and anode, but the anode layer overlays a thin film transistor (TFT) array that forms a matrix. The TFT array itself is the circuitry that determines which pixels get turned on to form an image.

AMOLEDs consume less power than PMOLEDs because the TFT array requires less power than external circuitry, so they are efficient for large displays. AMOLEDs also have faster refresh rates suitable for video. The best uses for AMOLEDs are computer monitors, large-screen TVs and electronic signs or billboards.

Top-emitting OLEDs have a substrate that is either opaque or reflective. They are best suited to active-matrix design. Manufacturers may use top-emitting OLED displays in smart cards.

Foldable OLEDs have substrates made of very flexible metallic foils or plastics. Foldable OLEDs are very lightweight and durable. Their use in devices such as cell phones and PDAs can reduce breakage, a major cause for return or repair. Potentially, foldable OLED displays can be attached to fabrics to create "smart" clothing, such as outdoor survival clothing with an integrated computer chip, cell phone, GPS receiver and OLED display sewn into it.

White OLEDs emit white light that is brighter, more uniform and more energy efficient than that emitted by fluorescent lights. White OLEDs also have the true-color qualities of incandescent lighting. Because OLEDs can be made in large sheets, they can replace fluorescent lights that are currently used in homes and buildings. Their use could potentially reduce energy costs for lighting.

In the next section, we'll discuss the pros and cons of OLED technology and how it compares to regular LED and LCD technology.

The LCD is currently the display of choice in small devices and is also popular in large-screen TVs. Regular LEDs often form the digits on digital clocks and other electronic devices. OLEDs offer many advantages over both LCDs and LEDs:

OLED seems to be the perfect technology for all types of displays, but it also has some problems:

In the next section, we'll talk about some current and future uses of OLEDs. 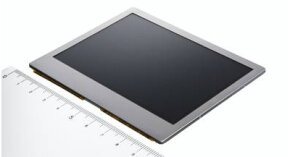 Currently, OLEDs are used in small-screen devices such as cell phones, PDAs and digital cameras. In September 2004, Sony Corporation announced that it was beginning mass production of OLED screens for its CLIE PEG-VZ90 model of personal-entertainment handhelds.

Kodak was the first to release a digital camera with an OLED display in March 2003, the EasyShare LS633 [source:Kodak press release].

Several companies have already built prototype computer monitors and large-screen TVs that use OLED technology. In May 2005, Samsung Electronics announced that it had developed a prototype 40-inch, OLED-based, ultra-slim TV, the first of its size [source: Kanellos]. And in October 2007, Sony announced that it would be the first to market with an OLED television. The XEL-1 will be available in December 2007 for customers in Japan. It lists for 200,000 Yen -- or about $1,700 U.S. [source: Sony].

Research and development in the field of OLEDs is proceeding rapidly and may lead to future applications in heads-up displays, automotive dashboards, billboard-type displays, home and office lighting and flexible displays. Because OLEDs refresh faster than LCDs -- almost 1,000 times faster -- a device with an OLED display could change information almost in real time. Video images could be much more realistic and constantly updated. The newspaper of the future might be an OLED display that refreshes with breaking news (think "Minority Report") -- and like a regular newspaper, you could fold it up when you're done reading it and stick it in your backpack or briefcase.

For more information on OLEDs and related technologies, check out the links on the next page.