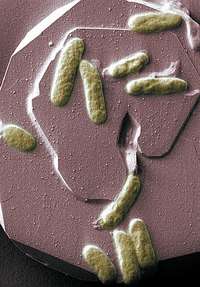 In the search for a better battery, researchers are trying everything they can think of. One team of researchers at the Massachusetts Institute of Technology is looking at capacitors, a type of electricity generator that dates back 300 years. Capacitors don't store as much of a charge as batteries, but they can be recharged in a few seconds, as opposed to the hours it takes rechargeable batteries to power up. Capacitors can also be recharged hundreds of thousands of times, which vastly extends their life over lithium-ion batteries.

The reason capacitors have fallen out of use is that they require a large surface area to power a device such as a laptop. The MIT researchers have gotten around this by applying nanotechnology to the capacitor. Nanotechnology uses incredibly small materials -- the MIT scientists are using nanotubes, which are 30,000 times thinner than a human hair [source: Science Central].

By expanding the amount of matter within the capacitor surface on a nanoscale, the researchers were able to give the capacitor the power required by mobile devices and electric cars, while reducing the surface area needed to generate the electricity.

MIT isn't the only institution taking another look at the capacitor. A team at LG Chemicals has created a hybrid of rechargeable battery and capacitor that is lightweight and biodegradable. The battery can store energy, and the capacitor releases that energy safely in large, predictable amounts. But the plastic battery is still under research, and in its current form won't make it to the market -- it can only hold about the same charge as a traditional alkaline battery, like the ones that power your point-and-shoot digital camera.

The LG battery does have an extra bonus in addition to its biodegradable property. It can be molded into any shape, which means that mobile device designers would no longer have to create a product based first on the size and shape of the battery it uses [source: Brown Daily Herald].

Batteries of all stripes traditionally rely on chemicals to create their charge. But research into a new type of battery uses more organic substances. In 2006, the U.S. Air Force granted $4.5 million to a University of Southern California-based research team to continue its investigation into using microbes as a power source. In the late 1980s, researchers discovered that the Shewanella oneidensis MR-1 bacteria naturally generates electricity, and since then, science has been searching for a way to harness its power and apply it to practical applications. The USC researchers have created a microbial fuel cell using the MR-1, but it's only been able to produce a weak current so far. The Air Force funding should help ensure that the researchers will continue their investigation, however [source: Physorg.com].

Regardless of what technology is employed in the battery of the future, it must possess at least three properties: It must be lightweight, it must be long-lasting, and -- perhaps most importantly -- it must not catch fire.

For more information on batteries and fire, read the next page.