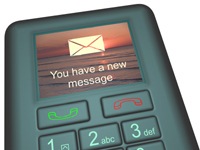 When messages are left, a prompt like this mailbox show up, alerting the user.
© Photographer: Brent Hathaway | Agency: Dreamstime

There are several types of voice mail systems available. Such systems are designed to function differently based on who's using them and where, what equipment and software is used, and who's providing the phone message services.

In general, two major systems include ones based on PC technology and proprietary systems using equipment specially designed and supplied by a voice-mail provider.

PC-based systems can be run using standard computers and servers. Such equipment can be modified to include voice board circuitry and additional plug-ins for phone lines or other equipment. These systems also include specialized software that integrates incoming and outgoing phone messages.

Service-provided voice mail systems use hardware that's specially built by the company. Such proprietary systems can be customized from the ground up for the type of business it will serve. They can be more expensive than PC-based systems because of their custom nature.

Other types of voice mail systems are available. While they each share some commonalities, there are important differences between them.

Residential voice mail, for instance, refers to voice-mail systems for the home. Generally these serve landlines and may include one or more "mailboxes" in which incoming callers can leave messages. In such systems, one mailbox typically acts as the main one, from which users can enter commands. Such systems can be based off-site with a service company or on-site with the resident's home computer. Users generally record a greeting and dial a special number and enter a password to retrieve messages. Cell phone voice mail works much the same way, except that it's based on wireless technology exclusively.

Business voice mail and office voice mail can be based on- or off-site, using PC or proprietary equipment. Such systems operate multiple mailboxes and generally have an automated attendant that guides both internal and outside users through commands to leaving and retrieving messages.

On the next page, we'll talk more about using voice mail.