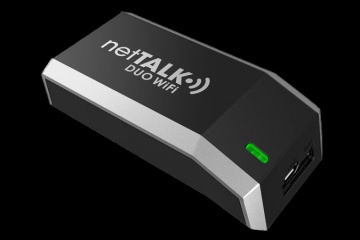 In 2012, MagicJack tried to sue competitor netTALK for patent infringement, but the case was dismissed.
© netTALK

The company hasn't been controversy free. Dan Borislow, founder of MagicJack, insulted netTALK's quality and the viability of the company in a 2010 interview, and then sued them for patent infringement in 2012, although the case was dismissed.

The company also sued Web site Boing Boing for defamation over an April 2008 article that brought up some aspects of MagicJack's end-user agreement that it found objectionable. These issues included the fact that MagicJack reserves the right to analyze the numbers you call for advertising purposes and the stipulation that any legal claims against MagicJack had to be handled by binding arbitration, as well as the user agreement not being clearly presented on its Web site or at purchase or installation time. The article also took issue with the lack of an uninstaller and some aspects of the company Web site. The suit was dismissed in 2010 and MagicJack was ordered to pay around $50,000 to Boing Boing in legal fees. The software can be more easily uninstalled now, and some changes have been made to the Web site. The terms of service still include their right to analyze the phone numbers you call and your registration information to target relevant ads.

MagicJack itself was charged by the Florida Attorney General over accusations that it charged customer debit cards during a 30-day free trial period, had limitations it wasn't disclosing properly and that there were issues with its handling of customer complaints. The company settled the dispute by paying a fine without admitting to any wrongdoing and resolved the complaints. It also made some changes to its business practices. As of fall 2013, the MagicJack FAQ specifies that credit cards will not be charged during the trial period, although a hold may be placed, and you will be charged if you buy more than two MagicJacks or purchase extra years of service. If you use a debit, bank or check card, you will be charged immediately, but you will receive a refund if you return your MagicJack before the 30-day trial period ends.