How does MagicJack compare to other similar services? 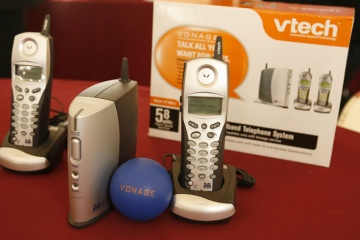 One major difference between MagicJack and most other VoIP devices and services, besides its diminutive size, is that it's super cheap. The original device was around $40, which included one year of service, and thereafter had an annual subscription fee of $20. Yes, that is annual, not monthly. The MagicJack Plus lists for $70, but tends to retail for around $50, and includes six months of service. You can pay $29.95 annually for year-to-year renewals, or the equivalent of $19.95 per year for a five-year renewal (paid upfront).

Most other VoIP services either have much more expensive upfront device costs or charge higher fees, usually on a monthly rather than annual basis, although MagicJack does have one very close competitor price-wise.

Its major competition includes Ooma, Vonage and netTALK. You can buy the Ooma Telo device for around $150, which gives you free unlimited calls within the U.S. for no cost other than government fees and taxes. If you want to make calls outside the U.S., Ooma also offers plan options starting at $9.99 a month or per-minute pay-as-you-go rates. Vonage provides equipment, charges $29.99 a month for an unlimited domestic and international plan, and has various cheaper calling plans including U.S. and Canada with limited minutes for $11.99 a month.

The competitor that is similar in price is the netTALK Duo device, with a $50 version and $65 WiFi version, both of which you can plug into your computer or router and come with one year of service to the U.S. and Canada. Additional years are $29.95, and you can add enhanced calling plans for additional monthly or annual fees, as well as an SMS text plan. netTALK also has a free app, but it doesn't include an incoming phone number and limits you to 50 free minutes per month.

With all of the VoIP choices, including MagicJack, you may be required to pay government fees and taxes, including monthly charges for E911. And any additional services you select will likely incur monthly or annual charges, so take care to research your options thoroughly.

VoIP service is also available through cable or phone companies that offer Internet service, and can often be fairly cheap with a package deal. To compare all the options to each other or to traditional phone service, you have to consider your calling area and phone number needs, and you have to factor in the cost of the required broadband Internet service.

There are other communication alternatives such as Skype, which allows you to video or voice chat with other Skype users, but also has plans that allow you to call mobile and landline phones from software on your computer, tablet or mobile for various monthly or per-minute rates. There's also Google Voice, which gives you a number and lets you have calls forwarded to any or all of your phones, and will send you transcribed voice mails, but the service depends upon you already having some sort of existing phone service. Various instant messaging programs and social networking sites also allow voice and video chat. But they're arguably not the same as having a home phone line.