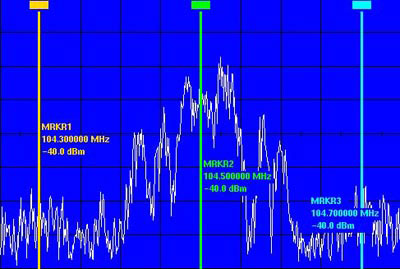 The radio waves that carry analog AM and FM signals are limited in the amount of information they can convey, both because of the nature of the waves themselves and the spacing of stations on the frequency band. FM stations are separated by 200 kHz, while AM stations have just 10 kHz between them. Alternate channel spacing of FM stations gives them 400 kHz to work with. The signals broadcast by radio stations are actually spread out on either side of the frequency into Upper and Lower Sidebands (USB and LSB).

The larger spacing between FM stations gives them enough room to broadcast higher quality audio in stereo, but not enough for true CD-quality audio. An FM signal could carry enough information for a higher-quality signal, but it would take up so much bandwidth that there would be room for far fewer stations on the dial.

HD Radio solves this problem by compressing the digital signal so more information can be sent along the same amount of radio bandwidth. Initially, iBiquity used a compression algorhythm called PAC (Perceptual Audio Coding). However, audio compressed with this method led to complaints about poor sound quality, so in 2003, iBiquity changed to HDC (High-Definition Coding), a different compression method that allowed for higher sound quality.

­ Although HD Radio is touted as providing CD-quality sound on the FM airwaves, the compression of the digital signal is a "lossy" method. That means that it discards some of the information in the signal, resulting in a reduction in overall fidelity to the original sound. Much of the discarded information is not perceptible to human ears, and the final product may sound very close to CD-quality, but technically it is not the same sound as on the CD.

The digital signal is sent out piggybacked onto the analog signal on the same carrier wave (the wave sent out by the transmitter that gives a radio station its frequency on the dial). A third signal can also be added -- this carries text data. It is an in-band on-channel (IBOC) system because the signal is piggybacked onto the analog signal and doesn't use up extra bandwidth. If the system was an in-band adjacent-channel (IBAC) system, the bandwidth would be increased by using space on nearby channels (and causing interference if another station was trying to broadcast there).

Implementation of HD Radio on the station side requires significant modification and upgrading, with cost estimates ranging from $30,000 to $200,000 [Sources: Crutchfield Advisor and Wired]. Because HD Radio is a proprietary system owned by iBiquity, stations also have to pay an annual licensing fee of $5,000.

Because HD Radio is broadcast over radio airwaves, it is free -- no monthly subscription is necessary. At first, many HD2 stations will be broadcast commercial-free, but as listenership picks up, stations will insert advertising just like their standard channels. These additional advertising revenues will help stations pay for the HD upgrades and licensing fee. ­