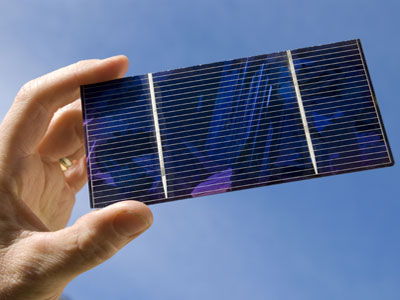 The key to this travel gadget -- a hand-sized solar cell
ason | istockphoto.com

To figure out how a solar-powered backpack works, we need to understand a little bit about the mechanics of the solar-powered backpack, or solar technology. It may seem complicated, but it's really pretty simple -- photovoltaic (PV) cells are what make it all happen. The cells, grouped together as modules or panels, collect light from the sun and convert it to usable electricity. They're able to do so with the help of something called a semiconductor. These are substances that can conduct electricity. In the case of solar cells, silicon is the semiconductor of choice.

­When sunlight hits a solar panel, the silicon semiconductor absorbs a portion of the light and its energy. When this happens, electrons in the silicon are knocked loose and they begin to flow freely. Electric fields in the photovoltaic cells wrangle those electrons and force them to flow in one direction like a cattle rancher guiding his heard. This creates an electric current that can be harnessed by attaching metal contact points at the top and bottom of the PV cell. Once the energy is collected, it can be used immediately as electricity or stored in a battery or series of batteries for later use.

The silicon semiconductor is naturally shiny and reflective, which isn't great for drawing in sunlight. To solve this issue, an antireflective coating is applied to the cell to keep energy loss at an acceptable five percent or less. Add a protective covering to the panel and you have an energy-harnessing machine. This is enough to get you a basic understanding of how this solar technology works. Now, let's learn more about how solar-powered backpacks puts this technology to work.