A Satellite by Any Other Name 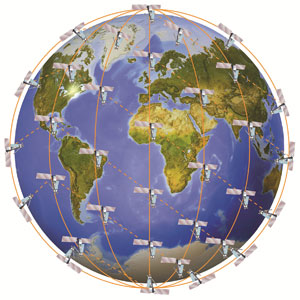 Satellite phones work with either low earth orbit systems or much higher geosynchronous systems. Each type of network has its plusses and minuses.
Courtesy Iridium

Satellite phone systems work very differently depending on the technologies each company deploys. Some companies opt for geosynchronous satellites, while others use low Earth orbit (LEO) systems. Each configuration, or constellation, has its pros and cons.

Geosynchronous satellites (also called GEO orbit or high earth orbit satellites) follow the Earth as it spins, meaning that they pretty much remain in a fixed location in the sky. They maintain a high altitude orbit, at around 22,000 miles (35,000 kilometers), and they're always centered above the Earth's equator.

These are huge, powerful satellites and just one of them can serve a large geographical area on the Earth's surface. With a constellation of only three or four satellites, a company may provide service for most of the globe. As such, these satellites are designed to handle large volumes of data, meaning they'll work not only for voice calls, but also for video streaming, file sharing, texting, television and much more. Inmarsat and Thuraya are two established companies that use geosynchronous configurations.

One downside of geosynchronous satellites is that their high orbits mean significant transmission delays of around 250 milliseconds one way, or a quarter-second round-trip. So when you're speaking to someone, you may have to wait for a few moments before they answer your questions. Or you may hear a disconcerting echo, which can be frustrating.

Also, their small numbers put these networks at somewhat greater risk for outages. When one satellite requires maintenance (or malfunctions), an entire section of the world may lose service until the issue is resolved. Because geosynchronous satellites hover mostly above the equator, they don't provide much coverage for the poles.

One of the biggest caveats to geosynchronous systems is related to size. To make a connection with these satellites you need a device that's roughly the size of a notebook computer; much of that bulk is comprised of a directional antenna. You also may need to calibrate the antenna and then point it towards the satellite in order to receive the best reception.

On the next page you'll read more about the perks and prices of picking a particular sat phone technology.