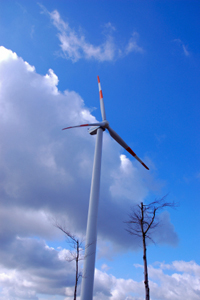 Wind turbines operate on the same basic principles as a hand-powered generator.
© iStockphoto.com/EdeWolf

Sometimes we take our modern electrical grid for granted, assuming we'll always have easy access to power whenever we need it. But there are quite a few situations where electricity isn't so easy to come by and places where there's no outlet to plug your cell phone charger into. For instance, you might travel into the wilderness (or an emergency might leave you stranded there). In the aftermath of powerful storms, it can take days or even weeks for utility companies to reconnect downed power lines. And there's always the chance that a zombie apocalypse will leave civilization in shambles. The batteries for your gadgets are only going to last so long.

The mechanics of hand-powered generators are not too complicated. They work like other generators, except the initial energy is provided by your arm rather than from steam by burning coal or a flowing river. A generator is basically an electric motor working in reverse. Both are based on principles of magnetism discovered by physicist Michael Faraday.

Faraday discovered in 1831 that passing a conductive wire through a magnetic field produced an electric current in the wire. By spinning a coil of wire around a magnet, he found that he could create a steady current. Thus, he could convert energy used to spin the coil into electrical energy. This principle powers generators that run on gasoline or diesel fuel, as well as the massive turbines in modern power plants, where the coils are turned by falling water or steam generated by burning coal or igniting nuclear reactions.

It's even possible to scale such a generator down so it fits in a travel gadget you can keep in your pocket. Instead of gasoline, steam, or falling water, the coils are turned by you. When you turn the crank on the side of the generator, the coils move around the magnet and generate current.

Some very simple hand generators don't have voltage regulators in them, so using them with sensitive equipment can be problematic. For example, if you connected one to a light bulb and turned the crank very fast, you could burn out the filament in the bulb. However, most modern hand-powered generators that are intended for use with a specific gadget do have the ability to regulate voltage so the device will work properly with it.

Next, we'll show you how to use a hand generator.

Making Your Own Hand-powered Generator

Since a generator is an electric motor working in reverse, it's fairly simple to make your own hand-powered generator. All you need is a cordless electric drill and a little knowledge about electrical wiring. Take the battery pack off the drill and wire the leads in the drill's battery compartment to whatever you want to power (rechargeable batteries work best). Affix a large handle to the drill's chuck, then hold in the trigger (as though you were activating the drill) and turn the handle. You may have to experiment with a voltmeter, changing the direction you turn the handle, and the torque and direction settings on the drill, but once you get it sorted out, you can charge the batteries by turning the drill by hand for a few minutes.

Using hand-powered generators is pretty simple. Some travel gadgets actually have generators built in. For example, gadgets with built-in hand-powered generators that people commonly use on camping trips include a radio and a light that can be used for signaling if you need help. Both of these devices can run off of regular batteries most of the time, but if you're stranded with dead batteries, a hand crank on the side lets you power it up enough to tune in a weather report or use the light. You don't have to worry about connecting the generator to anything because it all works internally.

Other hand generators are made to be used with a specific device, such as a certain brand of cell phone. The generator is a small gadget with a hand crank. A special connector lets you hook it up to the phone. You simply turn the crank to start charging the phone's batteries. While the voltage generated will vary depending on how quickly you turn the crank, built-in voltage regulators will maintain a steady current. The longer you crank, the more power you generate. A few minutes of cranking is usually enough to make a quick emergency phone call.

Some hand-powered generators are more versatile. Instead of being designed to connect to one specific device, they have either electric leads, a cigarette lighter-type socket or a common electrical socket. You can then either wire or plug in any device to the generator to give it power. Not every device will work with a hand-powered generator -- only ones that draw the kind of current and voltage put out by the generator will work. Generators usually output direct current (DC) power, but some have internal power inverters that convert this to alternating current (AC) power. A hand generator typically can output up to 6 volts, although some have gearings that step up the cranking rate and can generate higher voltages.

If you're wondering if the idea of a hand-powered generator is new, it dates back at least to the 1960s. Military units used special hand generators that could fold up into a backpack. With a soldier turning the crank, the generator could be used to power electronic equipment while in the field, far from any available power source.

If you want to try a hand-powered generator for yourself, you can find them at many outdoor outfitters. They can also be purchased from education supply stores. These hand generators often come with clear housings, so you can see the coils and magnets in action.

Travel over to the next page for more information on hand-powered generators.