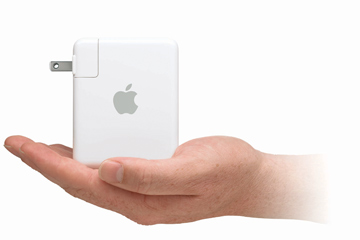 The pint-sized AirPort Express is jammed with all sorts of wireless networking capabilities. You can set up an access point, stream songs and video through iTunes, and much more.
Courtesy Apple

There was a time when connecting to the Internet meant sitting at a desktop computer that was connected to a short (yet expensive) Ethernet cable. And this was a relative luxury compared to yesteryear, when you needed a modem connected to (gasp) a landline-based phone system. Nowadays, wireless Internet is practically ubiquitous, thanks in part to devices such as the Apple AirPort Express.

The AirPort Express is meant to let you create a wireless Internet access point anywhere -- at home, in a hotel room or just about any place you need a fast, dependable connection. It also lets you stream all sorts of multimedia goodies to various devices and extend the range of an existing wireless network. You can even use AirPort to add wireless connectivity to any device, such as a gaming console, that's equipped with an Ethernet port but not its own wireless card.

That's a lot of features for a device that's only 3.7 inches (9.4 centimeters) high by 2.9 inches (7.5 centimeters) wide and 1.1 inches (2.8 centimeters) thick. The small size, of course, is by design. Its small form factor means the Express slips neatly into the side pocket of even a svelte laptop carrying case.

Connect AirPort to your DSL (direct subscriber line) or cable modem, or your Ethernet network, and it provides wireless Internet access for up to 10 users. Plug it into a printer via the USB cable, and presto, any of those 10 users is able to print documents wirelessly. And if you're on a Mac, built-in Bonjour capabilities mean users on the network can easily find one another to share pictures, videos or any other kind of data.

Its iTunes capabilities are another key AirPort selling point. Plug its 3.5mm audio mini jack into any speakers around the house and then you can stream music -- in digital or analog -- wirelessly to those speakers from the iTunes library on your desktop or laptop computer. If you happen to have a handheld Apple device, such as an iPhone or iPod Touch, so much the better; you can remotely control iTunes and play music on demand without ever leaving your cushy couch.

In a hotel room and chained to the uncomfortable desk thanks to a 2-foot-long Ethernet cable? Hook up the AirPort and now your room has swanky, secure wireless, so you can soak in the tub and surf. Is that last room in your huge house suffering from a weak wireless signal? Plop an AirPort within range of your base station and it amplifies that signal and makes it much speedier. 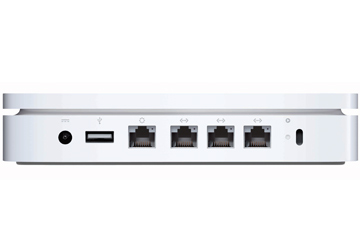 The Extreme version of the AirPort supports up to 50 users and it comes loaded with three LAN ports for added connectivity options.
Courtesy Apple

As with all popular hardware, this Apple product has changed since its introduction. The first version of AirPort Express arrived in 2004. The original shipped with an 802.11g networking chip and weighed less than 7 ounces, marking the company's entry into the ultra-portable router market. Official specs listed its range at around 150 feet.

In 2008, Apple kicked the Express up a notch, throwing in an 802.11n chip that doubled its wireless range to around 300 feet. That frequency also meant data transfer speeds that were nearly five times faster than before [source: Apple]. But beyond the change-up in networking chips, the product was pretty much the same.

The Express isn't the only AirPort in town. For power users, Apple also unleashed the Airport Extreme, which takes the Express's concepts and beefs them up significantly.

The company unveiled the first Extreme in 2003, and as with the Express, it used an 802.11g chip. It featured all of the same capabilities of the Express, but instead of maxing out at 10 users, it supported up to 50. With that increase in capacity, the Extreme was suited for small- and medium-sized organizations of all types.

Apple released an update to the Extreme in 2007. The current unit substitutes an 802.11n chip for the older 802.11g, meaning it's roughly five times faster. Those increased speeds, of course, make it a lot easier to send the image- and sound-laden multimedia files that have become staples of both personal and business correspondence.

The Extreme has other features that make it valuable to power users, including not one but three LAN (local area networking) ports. It also has multiple antennas, meaning it can send and receive data simultaneously for faster transfer.

Yet both the Express and the Extreme are rather tiny by traditional router standards. Their portability means just about anyone can set up a wireless base station anywhere they need it. And on the next page, you'll read more about what it takes to get data flying at your own Apple AirPort. 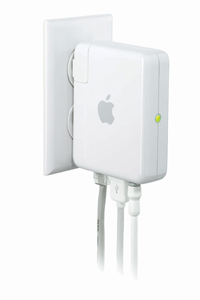 Plug it into the wall and then connect it to your Internet connection. After a brief and mostly automated software installation, your new AirPort is ready to use.
Courtesy Apple

Like so many Apple devices, the plain-white AirPort Express is meant to be simple to set up and use. Certainly, when it comes to the hardware side, this little box couldn't be much more straightforward.

To set up your AirPort as an Internet access point, start by connecting the Ethernet cable from your DSL or cable modem to the AirPort. Keep in mind that this product doesn't ship with an Ethernet cable, so if you don't have one handy you'll be making a run to an electronics store. If you're in a hotel room, of course, you won't see a modem of any kind; you'll still simply connect the Ethernet cable in your room to the Airport.

Then you plug the AirPort into an electrical socket. There's no power switch, so the status light should immediately illuminate. As the unit starts up, its activity light glows a dark yellow. The light changes to an unblinking green when it's ready to use.

Unlike many routers, there's no browser-based setup routine. Instead, you have to install the AirPort Setup Assistant software that's included on CD.

No matter which AirPort capability you want to use, this software serves as your central configuration and control hub. Completing the setup process means simply following the on-screen prompts. You'll select "create a new network" and then give your fledgling network a password. Then the AirPort network will be visible on any of your wireless devices.

On the next page, we'll touch on the rest of the setup processes that make your AirPort traffic move. 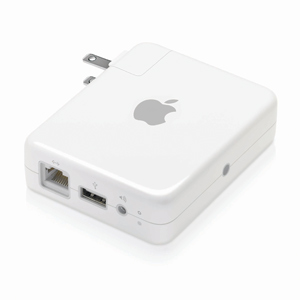 The AirPort Express has a built-in power supply. That means no cords to lose or tangle, whether you’re at home or on the road.
Courtesy Apple

Of course, setting up a typical network is only part of the power of your AirPort. The real fun comes into play when you dive into its music functions.

To set up the AirPort with your stereo speakers, you need either an analog mini jack connector or its optical, digital counterpart. You'll have to buy the cord separately because the AirPort doesn't include one. Plug one end into the Express and the other into your speakers. With the AirPort Setup Assistant software, create a new network. Then, in iTunes, you'll select your speakers from the speakers pop-up window that appears on the bottom-right side of iTunes.

Click to play a song and your tunes will crank through your big stereo speakers. One caveat, though -- you can only control playback through iTunes. That's easy enough if you have an iPhone or a laptop that you can carry around the house, but if your copy of iTunes is installed on a stationary desktop computer, you'll have to walk back to that machine to switch from Blake Shelton to Miranda Lambert.

For wireless printing, you'll connect the Express directly to your printer via a USB cable. Then you'll use your computer's operating system to locate the printer on the network.

Whether you opt for an AirPort Express or its Extreme version, Apple's devices help you sling information wirelessly in all sorts of data-intensive situations. From music to multimedia video, a quick

AirPort setup is an easy way to get your data off the runway and into the air.

It's hard to believe that I started using the Internet using a 300-baud modem tied to a landline. The squeaks and hisses of the connection handshake are forever embedded in my brain. And after all of that waiting, I was greeted by text-driven data and absolutely no graphics whatsoever. Video? The idea was laughable.

These days, my handheld phone has a faster data connection by far -- and it's always on. So it's easy to take products like the AirPort for granted. But suffice it to say, 20 years ago I would never have dreamed of a pocket-sized router that magically gave me high-speed access to a Web filled with more information and multimedia than I could imagine. The times have changed, and for the better.